A New World Has Emerge 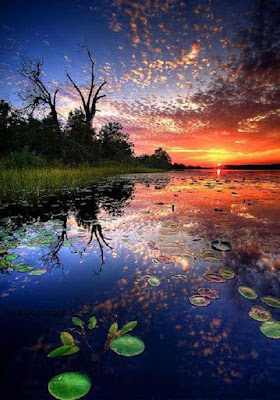 In the beginning "Earth was a soup of nothingness, a bottomless emptiness, an inky blackness. God's Spirit brooded like a bird above the watery abyss." (Gen 1:2).
"The moment Jesus came up out of the baptismal waters, the skies opened up and he saw God's Spirit—it looked like a dove—descending and landing on him." (Matt 3:16).
In the creation story God shows us what would happen when Christ comes. In the book of Genesis we saw that the earth was in bad shape when the Spirit came upon the face of the water and brooded like a bird. Also before Jesus came the creation was in bad shape before the Spirit came to the water in form of a bird. In the book of Genesis, the earth before the Spirit came signifies the world (the kingdom of darkness) while the earth after God recreated it signifies the new creation which is Christ Jesus himself.
Now the Bible says "the earth was a soup of nothingness, it was without form, a bottomless emptiness and filled with darkness".  This is the exact description of the old creation; the world as we see it today. Look around you and all you would see is a soup of nothingness; everything is without form, without meaning or purpose. Yes a scientists can tell you everything about a lion, it internal and external features, it behavior, how it lives and survive etc. But that scientist can never tell you is the meaning of a lion, why is a lion a lion? why should lion even exist? what is the meaning of the features and everything that constitute a lion? At this point all the knowledge about lion becomes useless because it has no meaning. Yes, everything has to have a meaning otherwise it is nothingness. Everything in the world had loss it meaning, humans live without knowing the meaning of their lives. The physiologist could tell us about our physical features and the psychologist could tell us about our behaviors and attitudes. But what is the meaning of these physical features of ours or our attitude and our behavior. What is the meaning of that which constitute us? What is the meaning of our lives? We can't find the answers to these questions in the world because the old creation is filled with nothingness. All our knowledge and all our accomplishment have been brought to nothing because they have no meaning. It all vanity, it appears today (so beautiful and amusing) but tomorrow it is no where to be found. Yes, everything we see around us, they all come and go, and are forgotten. We don't understand why they have to be, and what is the meaning of there existence? Does everything exist just to struggle for survive and eventually die one day? What does it all mean? the world is just a soup of nothingness.
The Old creation is also a bottomless emptiness. In the world we find that there is deep emptiness. We just can't ignore this emptiness no matter how much we try. Neither can we escape from it grip. We try to indulge ourselves with activities, seek entertainment but at the end of it all we find this emptiness staring at us in the face. We try to find purpose for lives, try to do something for the greater good. We fight tirelessly against this emptiness but we end up falling flat on our faces in defeated. Oh! how It tortures us; it seems like everywhere we go we find it, no matter how interesting and promising life may seem, we just keep finding ourselves in the pit of emptiness. It has made us frustrated, it as turn us into busybodies, and it has made us restless. We just can't win the battle. This emptiness is eating us up. There is nothing we can do about it because it is part of what constitute the old creation.
The old creation is also filled with darkness, yes darkness as thick as a wall. You could feel it pressure pressing upon you, almost choking you. But we are use to it now and we have adapted, as a result we are not aware of the deadly pressure of such darkness. The Bible explained that "darkness was on the face of the deep", yes there is greater darkness in the deep. Those who had gone deep into the world are envelop with greater darkness but yet they have little awareness of it. Oh! if only you could just try stepping out of the darkness for a while and then return, you won't be able to bear it and you would have pity on those who spends all their lives in that darkness. And things are not getting better, open your eyes! Look around you, and see that more darkness are gathering, the greatest of darkness would come upon this world. But it comes gently, so that people would be unaware of it until it suffocate them to death.
Wait! all hope isn't lost... God had ran to our rescue, His Spirit hovering over the face of the waters as God cause a new world to emerge out of the water just like in the days of Noah.
"The moment Jesus came up out of the baptismal waters, the skies opened up and he saw God's Spirit—it looked like a dove—descending and landing on him." (Matt 3:16).
Yes the dove landed on the new world just like in the days of Noah.
"He [Noah] waited another seven days and sent the dove out a third time. This time it didn't come back." (Gen 8:12)
The dove didn't come back because a new world has emerge out of that old corrupt world and the dove has landed on it, it has found a resting place on the new world. So also the Spirit of God came as a dove and landed on Christ - the new creation that God has given us. 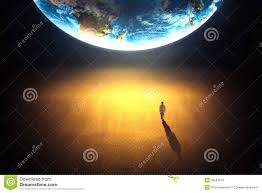 Now God have given a command just as he commanded Abraham, "Leave your country, your relatives, and your father's home, and go to a land that I am going to show you." (Gen 12:1). He is asking that we leave everything behind and go to a city which He has designed and built with His own hands, a city with permanent foundations (everlasting and eternal). This new land is immeasurable better than the old damage creation. Here, instead of nothingness there is meaning, instead of emptiness there is fullness and instead of darkness there is light in such radiant beauty. It is time to leave, you can't wait another second, leave the old creation now. For God as decided to destroy this old creation, He would unleash His wrath and judge it because it has become a home for abomination and all kinds of evil. But God loves you and He doesn't want you to be destroyed with the world that is why He had sent His messengers to you today just as He sent His messengers (angels) to Lot, to tell him “Get up, get out of this place; for the Lord will destroy this city!” and “Arise, take your wife and your two daughters who are here, lest you be consumed in the punishment of the city.” (Gen 19:13-15).
God loves you but this world deserve punishment, God is just and justice must be served. His love has cause Him to wait for you, He is delaying the judgment of this world because of you, He wants you to get out first. But He can't wait any longer, for her (the world) cup of judgment is full, the time has come for judgment. Leave now, journey to the new world. This is now your new home, for God has given it unto us. And yes, this City, this new world, this new creation is the person of Christ Jesus. Come now and have your rest in him. Submit under the reign of the Lord of this new world - this new kingdom. Submit yourself to Christ because his rulership is far greater than the reign of the devil and of death. Make Christ your Lord and he would be your saviour and your salvation.
Posted by David Emechete at 00:16