The Battle Of Holiness 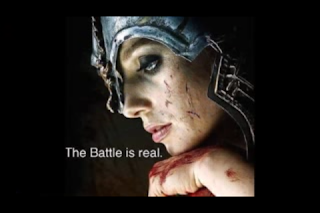 We are at war and whoever doesn't know or recognize this would be consumed by this war. Looking into the Scripture we find a battle pertaining to Holiness. In fact the tales of this battle saturates every verse in the Bible, from Genesis to Revelation. The battle is all about the devil's attempt to separate man from God. Before we continue we must understand that Holiness is not a thing, an act or an attribute. Holiness is a person and that person is God Himself. Now let look at an example of this battle from the New Testament.

"Then the devil took Him up into the holy city, set Him on the pinnacle of the temple, and said to Him, “If You are the Son of God, throw Yourself down. For it is written:
‘He shall give His angels charge over you,’ and, ‘In their hands they shall bear you up. Lest you dash your foot against a stone.’” (Mat 4:5-6)

The devil was trying to make Jesus unholy and he used a Scripture from Psalm 91:11-12. This had always been the devil's strategy in making God's people unholy. God is holiness and as long as God's people are united with God they are holy but the moment they are separated from God they become unholy. Anything separated from God is unholy. The word of God is God Himself therefore the word of God is holy (John 1:1).

Now the devil took the word of God which is holy and separated it from the One who is holiness. As a result those words became an unholy thing - yes, the word of God can become unholy when separated from God. God's words are in perfect harmony as they compliment each other and once that harmony is broken — a word separated from the whole body of the Word — that word becomes contradictory to the truth, it is no longer the word of God. That which is unholy is always in conflict with God. The devil takes a word out of context, he separates it from the whole body of the Word and it becomes alien, it becomes an unholy thing. This was what the devil did when he quoted, "‘You shall not tempt the Lord your God.’” (Mat 4:7). Yes, he quoted the scripture but it was an unholy word, something that defies.

This has always been the devil method in making God's people unholy. He takes something from God, separate it from God, hereby making it unholy and then try to establish a link between God's people and that unholy thing. This link when fully established draws God's people to the unholy thing therefore separating them from God and making them unholy. This was what the devil tried to do in the churches at Corinth, the gift of the Spirit is totally of God but the devil took it, separated it from the body of Truth, and subjected it to carnality. He turned it into a thing that corrupted the people of God. The gift of the Spirit must be used only under the reign of Christ, it must never become a thing for the gratification of the flesh. Paul in chapter 14 of the book of Corinthians tried to differentiate the gifts of the Spirit when it's in union with God, from the gifts when it is separated from God. When it is in union with God it brings edification but when it is separated from God it brings about disorder, confusion and strife.

We as Christians usually find ourselves in this battle. We desire righteousness so the devil brings an unholy righteousness that looks like that which is of God, but in reality it isn't. We accept this righteousness because of an inability to discern, and we become unholy. The devil does the same thing with grace. He presents to us a grace that looks like the one described in the Bible. But this grace only gives us license to sin and makes us corrupt. The devil does the same with modesty, faith, knowledge, wisdom, generosity, devotion, zeal etc. He separate these things from God, corrupt them, cause us to be united them.

He tells us 'this is of God and there is nothing wrong with it just take it'. Christians usually go around asking if something is wrong or right but that is not the issue, something may be right but unholy. The issue is whether or not something is Christ. Oh we listen to some music and say there is nothing wrong with it, the lyrics is morally okay. But the question should be, 'is it Christ?', does it reveal Christ? Does it cause me to look upon him, to fix my eyes on Jesus or is it making me look upon something other than Christ?'. We say 'there is nothing wrong with what I am doing, in fact the bible says so and so', and we go ahead quoting Scriptures. But we miss it, because the question should be 'is this in harmony with that which constitute Christ?'


You might also want to read;
The Procession Of Holiness
Christ Is Holiness