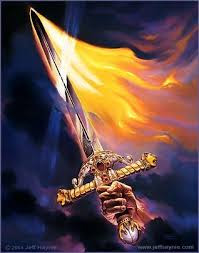 The victory of the Church is also the victory of Christ, for the Church is the body of Christ (Eph 1:22-23, 1Cor 12:12-27, Col 1:24 & Eph 4:4-16). David prophesied about Christ and said "When you go to war, your people will serve you willingly. You are arrayed in holy garments, and your strength will be renewed each day like the morning dew.... He will punish the nations and fill their lands with corpses; he will shatter heads over the whole earth he himself will be refreshed from brooks along the way. He will be victorious." (Psa110:3,6-7 NLT).

The Lord is preparing his soldiers for he said "I, the Lord, have dedicated these soldiers for this task. Yes, I have called mighty warriors to express my anger, and they will rejoice when I am exalted" (Isa 13:3 NLT).

He is preparing is soldiers to execute His judgment. When the time comes they will know, for the banner would be raised, Christ would be exalted. And when the soldiers see this they shall rejoice and come out from the secret place where they are being trained by the Lord Himself.

"like dawn spreading across the mountains, a great and mighty army appears. Nothing like it has been seen before or will ever be seen again." (Joel 2:2).

They shall come out so quickly in their numbers, spreading all over, like a mighty invasion. Marching out to execute the judgment of God, nothing would be able to stop them or break their advances.

"Look at them as they leap along the mountaintops. Listen to the noise they make—like the rumbling of chariots, like the roar of fire sweeping across a field of stubble... They break through defenses without missing a step." (Joel 2:5,8).

Yes, when it is time "the Lord shall utter his voice before his army:" (Joe 2:11 KJV). They will hear, for he had warned them saying "He who has an ear, let him hear what the Spirit says to the churches." (Rev 2:7). They will come out and offer themselves willingly.

They attack with the strength and zeal of a youth. Their zeal and strength shall terrify their enemies that they shall flee. But the Lord has determined in his heart to crush all his enemies leaving no one alive. For he desire to "find all his enemies; his right hand will find those who hate him. He shall make them as a fiery oven in the time of his anger; The LORD shall swallow them up in His wrath, And the fire shall devour them." (Psa 21:8-9).

"And it shall be; That he who flees from the noise of the fear Shall fall into the pit, And he who comes up from the midst of the pit Shall be caught in the snare; For the windows from on high are open, And the foundations of the earth are shaken... It shall come to pass in that day That the LORD will punish on high the host of exalted ones, And on the earth the kings of the earth." (Isa 24:18 & 21).

Through his soldiers the Lord would chase after his enimies, "out of his mouth goeth a sharp sword, that with it he should smite the nations" (Rev 19:15 KJV) and "he will shatter heads over the whole earth" (Psa110:6). As they continue in this chase of terror they will get tired and time of weariness will come, but they "will be refreshed from brooks along the way" (Psa110:7). The Lord shall be unto them a river that follows them and refreshes them in the time of weariness.

At the end the Lord would be victorious through his people, "for he must reign until he humbles all his enemies beneath his feet" (1Cor 15:25 NLT) and when he has done that "He (would) come to be glorified in His saints [on that day He will be made more glorious in His consecrated people], and [He will] be marveled at and admired [in His glory reflected] in all who have believed" (2The 1:10 AMP).

On that day we (all believers both dead and alive) shall rise up in the sky, boasting in glory, for we have been victorious. 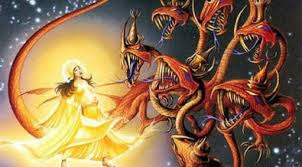 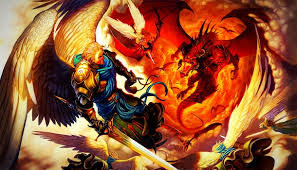 Verses Seven To Twelve
Verse 7 "And there was war in heaven, Michael and his angels fought against the dragon; and the dragon fought and his angels ". This is a spiritual battle that occur as a result of the fervent prayer of the overcomers against the powers of darkness. They (the overcomers not the angles) overcame the devil by the blood of the Lamp, they where not afraid of death as they fought against the powers of the darkness in prayer and in the power of the gospel (the truth or testimony of Jesus's victory). All the spiritual rulers in the heavenly places (Eph 2:2 & 6:12) will be cast down from power, with a great fall they shall be knocked out unconscious, weak and unable to operate properly. During this time the kingdom of God shall grow so mightily on earth as it power and salvation spread in a way that the world have never seen before. Salvation shall spread because the one who has blind people's eyes from believing the gospel had been cast down (2Cor 4:3-4).
Verses Six And Thirteen To Seventeen After the time of the overcomers the devil shall awaken, realizing his failure and that his time is almost up. He will go after the church and try to destroy her. He will send forth multitude of his agents into the Church to mislead the true believers but all of them shall be completely destroyed. With great miracles and power the Church will escape the devil and continue to exist and grow, although in isolation for three and half years. After the devil have realize that he can't touch the church, he will go after believers and persecute them for their faith. He will turn the world against the true believers. They would be greatly persecuted for three and half years.
Note: The book of Revelation chapter twelve end badly for Christians but other part of the book of Revelation shows how powerful and victorious the Church will be. One joyful thing that Revelation twelve tells us is that a fire is kindle in the Church. For the first time the Church brought the devil to his knees, the Church is finally entering into the stage of  full maturity and as this kindled fire is stirred up during the three and half years of persecution it will grow so wild and consume all of her enemies.
Revelation Chapter Nineteen
This is the last revival the Church will ever experience and it will take place after the three and half years of persecution. The Church had now been refined with both the great tribulation and the fall of Babylon (false and religious Christianity). At this time the Church had grown into maturity, for the Bible says "And he gave some, apostles; and some, prophets; and some, evangelists; and some, pastors and teachers; For the perfecting of the saints, for the work of the ministry, for the edifying of the body of Christ: Till we all come in the unity of the faith, and of the knowledge of the Son of God, unto a perfect man, unto the measure of the stature of the fullness of Christ:" (Eph 4:11-13 KJV). [There will always be baby Christians in the Church and the level of maturity of the Church will affect the stature of those who are said to be matured among her] And when the Church is fully matured her children is a perfect man who looks like Christ in his fullness (1John 4:17, 2Cor 3:18, Eph 3:19, Col 2:9 & Col 3:10). This perfect man is what Revelation chapter nineteen described.  The perfect man is the united force of all the mature believers as at that time. That man is Christ coming down from heaven through his people. 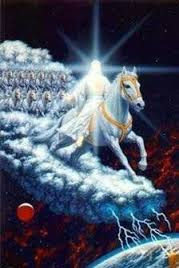