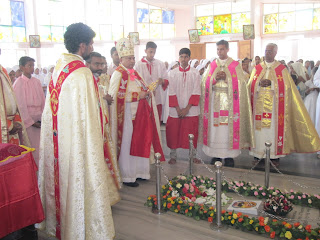 When a community of people have been together for a long time, there is a tendency to develop a shared identity and hereby create a culture or tradition. This is true for every group or community of people including Christians. Now the early Christians were a community, in fact they were seen as a cult. They spend so much time together, the Bible even recorded that they met everyday. Therefore it is normal for them to develop a culture and there is nothing wrong with that. But a great problem arise when Christians of today can't differentiate between the Christian doctrine and the culture of the early believers.
The Christian doctrine is that which would assure you of eternal life but a culture give you a sense of belonging to a group. The Christian doctrine is utterly spiritual, it is a spiritual practice of setting your spiritual eyes upon Jesus and increasing in your spiritual perception of the spiritual constituent of Christ. The Christian doctrine also involves the physical response or reaction to that which you've seen by the Spirit. While a culture is just a practice that has very little to do with your salvation. Let look at examples of the culture or tradition of the early Christian.
"Go ye therefore, and teach all nations, baptizing them in the name of the Father, and of the Son, and of the Holy Ghost:" (Matt 28:19). Baptism is a tradition that spring forth from the tradition of the Jews, it is done when one is being converted. Jesus gave the order and it became a tradition among the early believers. We must under that baptism is just a tradition, yes it was initiated by Jesus but yet it is still just a tradition. The virtue is not in the act of baptism but in the spirit of baptism and what baptism represent. Another tradition is the Lord's Supper, this also was initiated by Jesus and it became a practice among the early believers. It was a very interesting feast, there is much eating and drinking. In fact the Apostles started getting worried that people were getting drunk during this feast. Well, that feast is just another tradition that has nothing to do with eternal life.
One other tradition of the early believers that I would like to talk about is women covering their hair while praying. Paul mentioned this in his first letter to the Corinthians and Paul tried to prove that this tradition has substance in Christ. This is because all other tradition of the early believers have substance in Christ (it is shadowed after a reality in Christ). For example, baptism was shadowed after what happens in the spirit when we gave our lives to Christ, we were baptize in is death (we died together with him) and we resurrected with him. This was what the act of baptism tries to typify. The tradition of a people is usually an expression of the belief, ideology or philosophy of the people. This is why Paul tries to prove that the tradition of women covering their hair is a reflection of a reality in Christ.
Studying the kind of person Paul was one would realize that he loved unity. Paul wanted uniformity among the believers and when he discovered that the church in Corinthians were refusing to adhere to a tradition that all other church were following Paul tried to address this. After Paul presented his argument he went further to say, "But if anyone wants to argue about this, I simply say that we have no other custom than this, and neither do God's other churches." (1Cor 11:16). From this statement we can see that this is a custom among the churches. Paul didn't say if anybody argue about this and refuse to adhere to this the person would loose his eternal life and go to hell. It wasn't part of the Christian doctrine it was just a custom, a tradition that the early believers have come to develop. Due to the fellowship the early Christians kept this tradition may have develop over time and when it did it find justification from one of the truths in Christ.
Looking at the history of modern Christianity you would realize that certain tradition develop over time and later find justification in Bible. We should never mix culture or tradition and the Christian doctrine in our attempt to find the bases for eternal life. Eternal life is not in a culture or tradition but in Christ. The culture or tradition of Christians is a shadow of the reality in Christ but it is this reality in Christ that holds eternal life not the shadow. We Christians can choose to adhere or not to adhere to any of these tradition and yet still make it to heaven. Like we've explained before, the Christian doctrine is utterly spiritual and it has nothing to do with physical practices.
Posted by David Emechete at 07:08