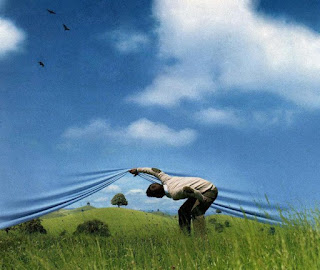 Christians can't tell the difference between Christian tradition and the Christian reality. The Christian reality or the Christian life is utterly spiritual while tradition had always been a practice that represent certain reality. We are not called into a tradition or a religion but we are called into the Life, into an established reality. We are free to have traditions but we should never substitute traditions for reality. Christian tradition simply represent spiritual reality but they are not that spiritual reality themselves. Only that which is spiritual have life, tradition doesn't have life, it is only a practice that is done for the remembrance of spiritual truth. A tradition is good only when it brings into remembrance those spiritual truth and spur us to pursue those spiritual realities. But tradition is empty when it is separated from the spiritual reality. It becomes useless when it is done without seeking, pursuing and experiencing those spiritual realities. For example, what benefit is water baptism when we do not experience dying with Christ and the power of the resurrection life. So many Christians have been baptize with water but they haven't experience the cross, such baptism is useless.
Marriage ceremony is not the marriage itself. Just because you have done the marriage ceremony doesn't mean you have been a good wife or a good husband. But the marriage ceremony is a commitment to be a good wife or husband and this commitment is fulfilled in the marriage itself. So also, just because you have been baptize with water doesn't mean you have experience the cross. Water baptism is only a commitment that whenever the cross is brought to you, you would take it and die to the flesh. If than you are baptize with water and you reject the cross when the Spirit presented it to you then your water baptism is a lie, it is false, worthless and useless. We should never replace spiritual reality with the tradition about that spiritual reality, sure is mere carnality.
It is the carnal man that make such a big deal out of traditions or practices while ignoring the spiritual reality that those traditions represent. For example we talk a lot about women covering their hair in church while ignoring the Headship of Christ. Paul explained that the tradition or custom of women covering their hair is a representation of how Christ is the head. But most churches ignore the Headship of Christ when they gather, they put man as head over their church service. The meeting is programed, ruled and coordinated by man, it is completely controlled and headed by man. The people sing not because they are led and directed by the Head (Christ) but because the music director (the choir) is directing them to do so, they pray not because the Head stimulate them to pray but because the prayer coordinator is stimulating them to pray. They defy the Headship of Christ through out the whole meeting but yet emphasize that the women must cover their hair, such carnality!
The reason why the Church is so divided is because we have mistake tradition for the spiritual reality. Jesus didn't come to give us a tradition or religion but he came that we may have life. Yet we are so absorbed in our Lord's supper (holy communion), Christmas, Ester, Palm Sunday, baptism and all kinds of so called Biblical practices. But we forget the Lord, we forget to live the Life and we ignore the spiritual reality behind these traditions and practices.
Posted by David Emechete at 08:14