The Greatness Of The Priesthood Of Christ 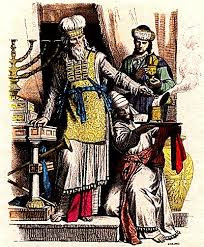 "Seeing then that we have a great High Priest who has passed through the heavens, Jesus the Son of God, let us hold fast our confession." (Heb 4:14)
"But now, Jesus has been given priestly work which is superior to the old priesthood, just as the covenant which he arranged between God and his people is a better one, because it is based on promises of better things." (Heb 8:6)
Let go back in time, to Israel and see how this little boy from the tribe of Levi watches his father offering a sacrifice. Ever since this boy was born he had watched his father slaughtering animals upon animals trying to cleans the sins of a nation. And year after year and year, thousands of innocent animals were slain but yet these sins remains unmoved. This little boy came of age and entered into the priestly work. He continued to slay animals, trying so hard to wash this sin away and then he grew old. His children continued in the struggle to watch just the sins of a nation but yet they also grew old in the job. Look at the Levites, so divinely ordained and powerfully anointed to carry out the priestly work. But yet generations after generations after generations struggling to cleans this stubborn sin away but yet the sins are still there. Oh, the thousands and thousands of innocent animals that was slain and yet nothing. All the blood that was shed, enough to fill the ocean yet could not wash away these sins.
And then a man came from nowhere, not even from the divinely order tribe of Levi and not even according to the system of the great law that wasn't written by God Himself. And this man set out to do what generations after generations of this great priesthood couldn't do for ages. I mean, who did he think he is? And even more, he wants to do it with is own blood. What an ocean of innocent animals blood couldn't achieve then this one man thinks he could achieve it with his own blood! this is suicidal. So all the principalities and powers in the heavenlies gathered to watch this man pull this stunt.
"For Christ didn't enter the earthly version of the Holy Place; he entered the heavenly Place Itself, and offered himself to God as the sacrifice for our sins. He doesn't do this every year as the high priests did under the old plan with blood that was not their own; if that had been the case, he would have to sacrifice himself repeatedly throughout the course of history. But instead he sacrificed himself once and for all, summing up all the other sacrifices in this sacrifice of himself, the final solution of sin." (Heb 9:24-26)
And in just three hours, Jesus Christ did what generations and generations of the great priesthood of the Levi couldn't do. Just one man achieve in no time what thousands or even millions of priest couldn't achieve in their life time. Christ even accomplished much more than what all those priest had been trying to do. All those generations of priests were trying to wash away the sins of a single nation but yet they couldn't do it. Even with the ocean of blood and a period of hundreds of years they still failed. But Christ didn't just wash away the sins of that nation, but also the sins of the whole world.
Yes, Jesus washed away the sins of those who had ever live, those who are presently living and those yet to be born - every single person who would ever live, down from Adam to those who would live at the last day. And there is more, Christ didn't just wash away the past and present sins of the world but all the future sins. This means all the sins you have ever committed, all the sins you are committing presently and all the sins you are yet to commit had already been dealt with on the cross. Yes, the sins you have not yet commit had already been wash away and forgiven over two thousand years ago and that is how great the priesthood of Christ is. Christ is the greatest of all priests, his priesthood transcends all other and his priestly ministry is superior over all.
Posted by David Emechete at 22:42