The Lordship Of Christ 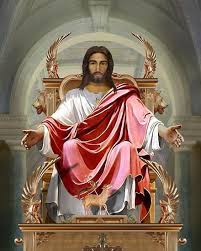 "which He worked in Christ when He raised Him from the dead and seated Him at His right hand in the heavenly places, far above all principality and power and might and dominion, and every name that is named, not only in this age but also in that which is to come." (Eph 1:20-21).
We know the devil is the ruler of the world. But the Old Testament prophesied about a new ruler. This ruler was anointed by God Himself to be Lord over all. Jesus was that ruler and that is why he was called the Christ (which means the anointed one) in Greek and Messiah (the same meaning with Christ) in Hebrew. Jesus is the Christ, the one that is to rule all creation.
The Christ was to ascend the throne through the baptism of death and suffering. Christ having offered himself; took upon himself the sin of the world and died the most shameful death, he resurrected and was received up to heaven. He was then enthroned by the Father. He was enthroned as Lord of all, made ruler over all creation (Eph 1:20-21 Matt 28:18). There have been a change  of power, a new ruler has taken the throne and he was anointed, appointed and endorse by the God who created all things.
"Jesus drew near and said to them, “I have been given all authority in heaven and on earth." (Matt 28:18).
Jesus as Lord has all the authority to rule and exercise dominion over all, both in heaven and on earth. Although under the reign of Christ there are rebels but yet when he gives his command all must obey including the rebels - that is the greatness of his reign. Christ also owns everything under his reign, everything both living and non living thing. Everything under the reign of Christ belongs to Christ.
Jesus is not just Lord over some evil powers outside there but he is Lord over every one of us. Christ is Lord and this is something declared by every Christian but we have very little understanding of what it means. Concerning our salvation the Bible says "He has delivered us from the power of darkness and conveyed us into the kingdom of the Son of His love," (Col 1:13). At salvation we were brought into the kingdom of the Lord. Christ reign beyond his kingdom, he reign over all creation. His kingdom is for those who have submitted to his reign because it contains the full right and privileges of his reign.
The goal of Christ reign is is to extend his kingdom until it cover the whole earth. The kingdom must be all inclusive i.e all creation must submit to him. Christ goal is to bring an end to the rebellion against his reign. The kingdom of God has always existed in heaven. The kingdom was separated from the earth and some other creations because these have be taken over by the devil. But Christ must win back everything, he must reconcile the whole creation to God. The kingdom can only fill the whole world when all creation have submit to the Lord. When Jesus came to earth his kingdom came down with him, Christ is the embodiment of the kingdom of God. But other people didn't have access to the kingdom until Jesus died and resurrected. Through his death Jesus made open the gate of the kingdom so that many can enter and be saved. The kingdom of God is the land of salvation, so those who enter into it are saved. But salvation is not God's end, God is still pursuing an all inclusive kingdom. A kingdom that have brought in not just fallen man but all of the fallen creation both in heaven and on earth. God must win back everything into His kingdom.
The kingdom is the acknowledgement and ssubmission to the Lordship of Christ, because only those who have acknowledge and bow to his Lordship can enter. Christ desire that his Lordship might be acknowledged in all of creation and he must bring this to pass. Therefore the Lord has determined to bring all to there knees. Yes, all in heaven and on earth must bow, every principalities and power and every created being must bow unto Christ. The devil and the rest of the rebels have no choice, they all have to bow and admit that Christ is Lord. There is no escaping it, everything is destined to bow before the true Lord.
There are two ways that all would bow, it is either they bow willingly or they bow in humiliation and defeat. Christ have sent forth those who witness his victory and enthronement, they are scattered all over the world declaring the greatness of his reign so that all would bow before the Lord. Many are coming to see that indeed Jesus is Lord and they are submitting themselves to his reign. But those who rebel against his reign, who resist his Lordship must be brought to humiliation and defeat. When they taste the power and the wrath of the Lord they would be force to bow.
"For Christ must reign until he humbles all his enemies beneath his feet." (1Cor 15:25).
He must reign, no resistance can stop his reign and every rebel have no choice but to bow before his reign. All shall fall before his feet and bow either willingly or unwillingly, for there is no escape. No matter how they try to run from this they would surly end up at his feet in submission to his reign - yes they would shamefully fall at his feet. Therefore it is either you humble yourself before the Lord or be humiliate before the Lord, either way you would end up on your knees. So choose today, choose either humility or humiliation. Make the wise choice my dear, for there is no where else to run to, the Lord is in power.
Posted by David Emechete at 12:12