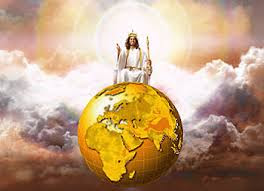 "For He [Christ] must reign till He has put all enemies under His feet." (1Cor 15:25).
Christ must reign, this has always been God's object, His goal and final end. You can see it all through the Scripture, even in the Old Testament, they all points to the coming Lord. Through the many prophecies, the Israelites had been prepared, waiting anxiously for the Christ to come and take his throne. As if that was not enough, John the Baptist was also sent to prepare the way for the Christ. This had always been God's desire, to have a representative man ruling His Kingdom. Remember what He told the man He created after His image, “Be fruitful and multiply; fill the earth and subdue it; have dominion over the fish of the sea, over the birds of the air, and over every living thing that moves on the earth.” (Gen 1:28).
Adam was only a shadow, a type of Jesus the Christ (Rom 5:14). And then concerning Jesus the Bible says "He is the image of the invisible God" (Col 1:15) and "that in all things He may have the preeminence."(Col 1:18). The first man who is created in the image of God should have dominion and now the second Man, a new Man "who being the brightness of His [God's] glory and the express image of His [God's] person" (Heb 1:3) should have preeminent over all things. God, from Genesis revealed His highest and final goal, yes the end was revealed in the beginning.
Christ must reign, but now that he had ascended to the heavens how is he going to continue reigning? He has a body on earth, a people through whom he would exercise his dominion. But for Christ to use these people to reign on the earth he must first take hold of this people and that was why he demanded that his disciples must be filled with his Spirit, they must allow his Spirit posses them. Look through the book of Acts and you would see all those emphasis, so much significance and importance placed on being filled with the Holy Spirit. Yes, the Spirit of Christ must posses every believer so that Christ can have a hold on them and use them to reign on earth.
To the early Christians the two prominent title of Jesus was Christ and Lord. Christ means the one anointed to sit on the throne and rule while Lord means the one that owns the servant and rules. Whenever they call him Christ or Lord they are saying "this is the one lelegally vested with the authority to rule, he owns us, we are his slaves and he rules through us". They understood the goal of God, they understood that Christ must reign and that is why they baptized every new member.
The Apostles go to the synagogue and they preach about Christ and people believed but that was not enough. They went ahead to baptize them before they can become a part of the Church. Baptism wasn't a religious rituals but everybody who gets baptize agrees that they are dead, they give away there personal rights, obligations and responsibilities. They give themselves to Christ to be Lord over them i.e they no longer belong to themselves, they are mere slave to the Lord, they don't own anything for themselves, for all that they own now belong to Christ. They fall beneath his feet and lay dead so that Christ can posses them and start living through them.
Baptism to them was a solemn decision, there heart is detached from every other thing and focus on only one thing "Christ must reign". That is all that matters, our lives no longer matter, our self-interest no longer matters, our right to make our own decisions is strip off because it no longer matter, our comfort, convenience and satisfaction no longer matters, our choice no longer matters and so on, I think you get the point now. Nothing else matters to us anymore, for our greatest priority is that Christ must reign. This is true Christianity.
Posted by David Emechete at 03:29