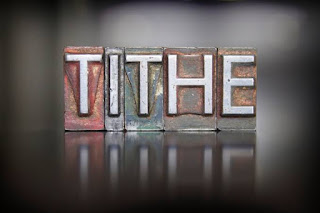 Jacob defined tithe when he said, "I will present to God a tenth of everything he gives me.” (Gen 28:22). Tithe is giving back what the lord has given. The tenth is a representative of the whole but all these are just the type or figure. In the reality there is no need for representative. The Son gives to the Father all that the Father has given him - this is the reality of tithe as it is in the God head. Christ is God and you would not find the type in God, what you would find is the reality. The Bible reveals to us that we are in Christ. If we are in Christ then we would be in the reality of tithe and not the type. You cannot be in the reality and yet practicing the type. No one having his dream car would abandon it to play with a toy that was made to look like the car. It would be pure foolishness.
Yet Christians who are meant to be a people in Christ abandoned the reality only to practice the types. Watching Christians paying money as tithe is like watching grownups playing with the toys of there dream car when they have the car abandoned in their garage. It is as foolish as that. We are in Christ, it is foolish to abandon the reality and focus on practicing the type. We are suppose to focus on experiencing the reality. We experience the reality by pouring back to the Father the life which the Father has given us through Christ.
Paul stated that, "But I will rejoice even as my life is being poured out like a liquid offering to God, just like your faithful service is an offering to God." (Phi 2:17).
"My old self has been crucified with Christ. It is no longer I who live, but Christ lives in me." (Gal 2:20).
Paul experienced the reality of tithe when he poured out his life as an offering onto God. Yet the life that Paul offered was not his, it is Christ's life and Christ's life is the life given by the Father. Hence, the Father gave Paul life through Christ and Paul offers it back to the Father - this is tithing in the New Testament. Paul paid his tithe to God by living a life that is utterly consecrated to God. Paul spent his whole life trying to live that life (the one that came from the Father through Christ) as an offering to God. Therefore tithing in the New Testament is expressing or living the life of Christ in you. It is being crucified in order to live by the life of Christ. We tithe when we spend our lives try to express the life of Christ in us for God's sake.

This topic belongs to a series, below is the rest of the series.
Tithing In The New Covenant
Tithe And Financial Prosperity
The Growing Tithe
First Fruit And Burnt Offering