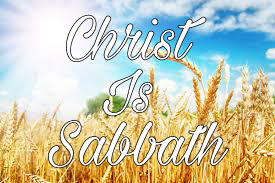 During creation God worked for six days and on the seventh day He rested and that days became Sabbath as God invited man into His rest. Man was created at the end of the six day in order to join God in the rest of the seventh day. But all that is a small picture of what Sabbath is, let look at the bigger picture. Before time began God set out to create something much greater than man, something even more greater than all He had ever created. God plan was to create a new creation. The same way He used dust to create man, God would use the old creation to create the new creation. Genesis is the story of the creation of the old creation, this old creation is the smaller picture. Let us now at the bigger picture in the story of the creation of the new creation.

Using Paul's argument we would now reconstruct the story of the creation of the new creation. The old creation is the natural and the new creation is the spiritual, the spiritual is greater than the natural, it is the bigger picture. God set out to create His masterpiece (Eph 2:10). This is unlike anything He had ever created. It wasn't going to be easy but this is what He desire. First He must create the natural - the old creation. Then using elements from the old creation He would create the new.
"It is  sown a natural body, it is raised a spiritual  body. There is a natural body, and there is  a spiritual body." (1Cor 15:44).
God would create the first man (the natural man) and bury the seed of the first man then out would come the new man - the new creation. This was His plan, and His only Son had to become the seed of the first man to be buried. In the bigger picture God never stop working on the seventh day and Jesus testify of this.

"So the Jewish leaders began harassing Jesus for breaking the Sabbath rules. But Jesus answered them, My Father has worked [even] until now, [He has never ceased working; He is still working] and I, too, must be at [divine] work." (John 5:16-17)."

God didn't rest on the seventh day, in fact He never rested until Jesus declared, "it is finished" (John 19:30). The finished work of Christ is the rest of God. That is the real Sabbath and the new man was created to enter into this Sabbath with God. "For only we who believe can enter his rest... For all who have entered into God’s rest have rested from their labors, just as God did after creating the world." (Heb 4:3,10). Those who believe are those who are in Christ, they are those who the Bible describe as "a new creation" (2Cor 5:17). The new creation is in Christ and the new creation is in the rest therefore Christ is the rest.

"So don’t let anyone condemn you for what you eat or drink, or for not celebrating certain holy days or new moon ceremonies or Sabbaths. For these rules are only shadows of the reality yet to come. And Christ himself is that reality." (Col 2:16-17).

God rest is in the finished work of Christ and those in Christ are in this finished work, they are in the rest. Yes, they are in Sabbath because Christ is the reality of Sabbath, he is Sabbath. "The old system under the law of Moses was only a shadow, a dim preview of the good things to come, not the good things themselves." (Heb 10:1). We are in confusion because we've all been looking at it wrongly. Sabbath is not a day, what we have in the Old Covenant is a shadow. Paul said it himself. We have focus too much on the shadow. Sabbath in the Old Testament is not even on Sunday, it is on Saturday. But all that are the shadow, the smaller picture. The reality can be understand through the shadow.

Sabbath is about God's rest. God rested and brought man into fellowship with Him in His rest. Sabbath is about resting in God sufficiency. Observing the Sabbath is laboring to rest. It is the struggle to stop depending on yourself and to stop finding sufficiency in yourself. Man is proud, always thinking he has want it takes. But we observe the Sabbath by refusing to rely on ourselves, our abilities, our talent and our wisdom. We rely on God, we find sufficiency in God through Christ and we embrace the finished work that God has accomplished through Christ. We crucify the flesh and die to ourselves in order to live totally dependent on God. Christ is the end of the flesh and all of it work. He is the rest and he is God sufficiency - yes, Christ is Sabbath.
Please comment below and share your opinion. Do not forget to share this post if it blesses you - just click 'share' bellow.
Posted by David Emechete at 20:18