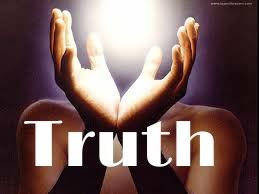 For something to be true it must conform to a certain reality, that reality is the model of truth. Truth can only be true if that model is tangible. Many have argued that truth does not exist or that it is simply relative. This is because we can't perceive the model with our natural faculties. We have assume that if it can't be perceive by our faculties then it is subjective - it is merely in the hands of man and anybody can decide what is true to him. Hence, we assert that if you think something is true then it is true to you. Man have even come to suggest that there is no absolute truth.

But our fathers seemed to be so sure that truth can be determined, they believe truth exist. If truth exist then the model of truth must be tangible, it must be objective. This reality, although beyond the perception of the physical senses is objective, it has a definite form. Ancient men had learned to perceive things with their spirit and through this way they try to determine the truth. With their spiritual perception they try to know this model, this reality.

Then Jesus came and declared that he is the truth; he is that model, that reality by which truth is derived. Everything that is said to be true has a level of conformity to him. They are a type, copy, shadow, prefigure or a picture of Jesus. This Bible reveals this saying, "Everything was created through him and for him." Using the Message Bible it says, "For everything, absolutely everything, above and below, visible and invisible, rank after rank after rank of angels—everything got started in him and finds its purpose in him." (Col 1:15-16 MGS)
Everything got started in Christ, they find there meaning and purpose in Christ because they are a type of him. They are made to conform to him and that is why they are true. Our dictionary defines truth as that which conform or is in accordance with reality. "Christ himself is that reality." (Col 2:17). Truth is that which conforms to Christ, that which is accordance with him. In essence truth is all about him, he is the truth. Truth is a person, it is not a concept that model man tries to grasp neither is it an abstraction that the philosophers tries to comprehend.

Truth is tangible and objective because it is a person. The reason why men have struggled to understand truth is because they thought it is some kind of dead element that you can dissect and analysis to determine its constituent. But it is alive and a living things is best understand by observing it live. To know the truth we must encounter Christ, observe him and experience him. Coming to know him is coming to know all that is true.

You might also like to read:
Unity In Faith And Knowledge
The Truth Seekers
Knowing The Truth
The Anointing To Know The Truth