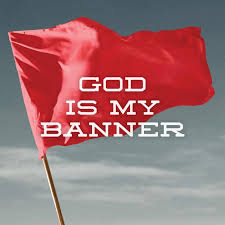 All through the Scriptures we can observe a battle that is centered around the Name of the Lord. It is easily understood when we know the true meaning of a banner in a battle. A banner represent the pride, honour and glory of the soldiers. It represent that which they have pledge there allegiance. And when the banner is lifted up their pride rises high, they are ready to give themselves, to die for the sake of that which the banner represent. During the battle as they fight and begin to loss their strength, the banner is raised and it draws the attention of the soldiers back to the reason they are fighting, it gives them strength, uniting them, causing them to listen to their leader as he gives instructions to regroup and fight with unity and courage. The ancient people believe the the nature of the banner determines victory i.e victory is base on the banner. Banner is perceived as very crucial in a battle. The soldiers draws strength and courage from the banner. The banner represent their identity. The soldiers hold up the banner as they fight, they would do anything to prevent it from falling because if it falls they have been brought to shame and humiliated. Soldiers with banners are usually strong, united and fearless with resoluteness (Song 6:3,9)
"We will [shout in] triumph at your salvation and victory, and in the name of our God we will set up our banners. May the Lord fulfill all your petitions. (Psa 20:5)
The Name of our Lord is our banner. Usually soldiers use a symbol of their king or master as their banner. David went to fight Goliath with the Name of the Lord and he came back with victory. During the time of Moses something happened that will help us understand the significant of the 'Name'. The Israelite were in a battle with the Amalekites and when Moses held up his staff in his hands the Israelite were winning the battle. But when Moses put down his hand the Amalekites start defeating the Israelite. That battle represent what has been happening in the spirit all this while. The staff of Moses represent the banner of the Name of the Lord and each time that banner is lifted up the power and the glory of God rest upon His people and victory is the outcome. Each time God's people submit themselves to God, reverence and honour His Name, then they have raised the  banner and the people gain ground while their enemies flee in defeat.
As soldiers of God we need to learn to go into battle with the banner of the Name. The greatest victory mentioned in the Bible is in the book of Revelation and it was a victory because the banner of the soldiers was the Name (Rev 19:16). During the first century the devil used the Roman Empire to fight against God's people. But God's people was victorious because they understood the significant of the Name. Look at the New Testament and all you would see is a people who are obsess with the Name. They went into battle with the banner of the Name lifted high and they were ready to die in order to keep that banner standing high. As a result the devil was defeated and where is the Roman Empire today? It have cease to exist, it is now nothing but history while the Church continue to stand strong.
But today the Church isn't doing so well in this battle; we are so divided and we are just struggling to stand while the world in all of its carnal practices is penetrating into the Church. What shall we do to unit the people, to motivate them, to get them on their feet, fighting like the soldier that they are?
It's the banner of the Name, when it is lifted up the soldiers reunite, reinforce and are motivated to fight. And as they lush the attack they gain ground and push back the enemy. We lift up the banner by acknowledging the supremacy of Christ, yielding to his Lordship and lifting him high above our lives, our desire, our ministry and every other thing. Let us come to the understanding that Christ is all that matters. Let us put Christ center and Supreme in all things. Let us lift up the banner of the Name, let us fix our eyes on nothing but his name then we would find a ground to be united, for only then would we have victory and crush our enemy.
Please comment below and share your opinion. Don't forget to click "share" below if this post blesses you.
Posted by David Emechete at 05:10