The Liberty Of Order 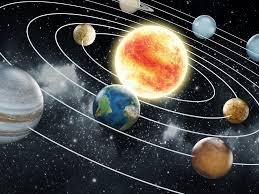 God is immeasurably wise, the complexity of His wisdom cannot be grasped, yet His wisdom is revealed in His creation.

"When I look at your heavens, the work of your fingers, the moon and the stars, which you have set in place," (Psalm 8:3-4).

"He has inscribed a circle on the face of the waters at the boundary between light and darkness." (Job 26:10).

"Thus says the LORD: If I have not established my covenant with day and night and the fixed order of heaven and earth," (Jeremiah 33:25).

"He is the sole expression of the glory of God, and He is the perfect imprint and very image of [God's] nature, upholding and maintaining and guiding and propelling the universe by His mighty word of power." (Heb 1:3)

Have we forgotten that it is God who created the universe and put everything in such perfect order? The universe is set in such liberty that there are no written laws or external regulations yet we have perfect order. The order is an innate orders hence the liberty. The universe is in liberty yet it operates on certain laws. These laws are not externally impose but internally expressed. Every element freely expresses it nature with no external control yet there is order. This is how God has created the people of the New Covenant.

The Bible calls the people of the New Covenant, "a New Creation" (2Cor 5:17). If the old, imperfect and passing-away (temporal) creation is created in such order how much more the new and perfected (Heb. 10:14) creation. God didn't assigned man to govern the order in the universe, neither did He gave the universe a book of don'ts and dos. But the universe freely expresses an order that is inherent in its nature. This is the liberty that cannot depart; it is 'the law of liberty' which God had also established in the New Covenant.

"Behold, the days are coming, says the LORD, when I will make a new covenant with the house of Israel and with the house of Judah not according to the covenant that I made with their fathers in the day that I took them by the hand to lead them out of the land of Egypt, My covenant which they broke, though I was a husband to them, a says the LORD. But this is the covenant that I will make with the house of Israel after those days, says the LORD: I will put My law in their minds, and write it on their hearts; and I will be their God, and they shall be My people. No more shall every man teach his neighbor, and every man his brother, saying, ‘Know the LORD,’ for they all shall know Me, from the least of them to the greatest of them, says the LORD. For I will forgive their iniquity, and their sin I will remember no more.” (Jer. 31:31-34)

In the Old Covenant there had to be external laws, rules and regulations because man was death. He was dead to the innate order that God created in him from the beginning. He was overtaken and subjected to disintegration, disorderliness, death and decay. Life is order and death is disorder and rebellion. Man had life from creation but the moment man sinned he died and became subjected to disorderliness and rebellion. He cannot help but to rebel and go against order. He is now destined for self-destruction and he cannot save himself. He needs something external; a constrain, a list of don'ts and dos to put him in order. Liberty means freely expressing yourself but all that is in man is death — a tendency to rebel and self-destruct. If man should express that which is in him it would only lead to disorder, chaos and of cause self-destruction, hence, the fear of freedom and the need for laws, rules and regulations. But all these are meant for the dead man.

Jesus came so "that man might have life, and have it more abundantly." (John 10:10). Jesus mediates a New Covenant that consists of a people with life. All those under the New Covenant have life and therefore they no longer have to live like dead men. The life in them has given them an innate order or law which they freely express. The more we are awaken to the life in us is the more we freely express the divine law and order. The New Covenant people are in liberty; they are now govern by the liberty that cannot depart. This is what God meant when He said, "I will put My law in their minds, and write it on their hearts; and I will be their God, and they shall be My people. No more shall every man teach his neighbor and every man his brother,”

"But you have an anointing from the Holy One, and you know all things. I have not written to you because you do not know the truth, but because you know it,... But the anointing which you have received from Him abides in you, and you do not need that anyone teach you; but as the same anointing teaches you concerning all things, and is true, and is not a lie, and just as it has taught you, you will abide in Him." (1John 2:20,21 & 27).

"When I swore that the waters of Noah Would not flood the earth again; so I have sworn that I will not be angry with you Nor will I rebuke you." (Isa 54:9).

God has promised to never be angry with us because He knows that we won't continuously displease Him, for He has put in us a law and we know all things. The truth lives in us and we abide by this truth. God trust us to walk in the truth because that is how we are constituted. Just as you trust a dog to bark and you trust a fish to swim, you can also trust the New Covenant people to be righteous and holy. We don't need to be given a list of don'ts and dos, for we already know all things and we are constituted to abide by the truth. Just as you don't teach a dog to bark, the New Covenant people don't need to be taught God's law neither do they need to learn how to obey it. They simply need to learn how to be themselves, they need to learn liberty. The problem is that we are so use to being slave (to sin) that we find it difficult to just be free. So yes, we need to be taught liberty, even though it sounds absurd.

We were given a law of liberty and not a law of works. Therefore we need not to learn how to do certain good works but how to be free. The New Covenant people are not a people trying to be as good as they can be. But they are a people trying to be as free as they can be. We are learning to be subjected to the law of liberty, to be enslaved by the Lord of liberty. "Now the Lord is that Spirit: and where the Spirit of the Lord is, there is liberty." (2Cor. 3:17). We are learning to be obedient to liberty not a list of rules and regulations. Our effort is focused on breaking through every boundary, limitation, and stronghold etc. until we burst forth in complete liberty - yes, it's the liberty that cannot depart.