The Stone Cut Not With The Hands Of Man 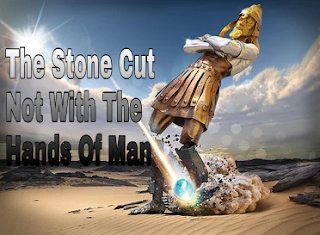 "As you watched, a rock was cut from a mountain, but not by human hands. It struck the feet of iron and clay, smashing them to bits. The whole statue was crushed into small pieces of iron, clay, bronze, silver, and gold. Then the wind blew them away without a trace, like chaff on a threshing floor. But the rock that knocked the statue down became a great mountain that covered the whole earth." (Dan 2:34-35).
Read the verses above carefully and you would notice that it was a piece of rock cut from the mountain and this rock later became a mountain. Christianity also started with a few group of people which later became millions of people from many cultures of the world. Another thing we would like to point out in the above verses is that the rock was cut "not by human hands". This single statement has such great significance. We must understand that it is only the rock cut not with human hands that was able to crush every power and authority that is not of God. It destroyed all the works of the devil.
Oh how we desire this, we want all the works of the devil to be destroyed but we must understand that human effort can't do this. All our man-made organizations, movements and Christian groups can't do this. It must be something carved out by God Himself, it must be totally and utterly Christ. A rock cut by man's hand cannot crush the devil. In the flesh and and out of our human effort we've built churches and organizations thinking that it would crush the devil. We've construct and build bricks, gathering them together in order to have a religious structure, a tower big enough to reach the heavens and bring God down on earth.
But no, human effort can't bring down God's presence. Such effort would only lead to confusion, for it is nothing but the tower of Babel. We think we could use our towers of Babel to bring God down to intervene in our helpless situations? We would fail a thousand times. Can't you see how our towers had crumbled and how confusion and division has overtaken Christianity? The tower of Babel would only bring confusion and division, that is all it could do and sadly that is all Christianity has – yes, confusion and divine. Yet we are still making the same mistake... still trying to make more bricks and build even more towers. Are we not tired of this confusion and division? When would we learn? I'm not writing this to cause more division but I am writing that we might see the cause of this division and pursue the solution.
It is only the rock cut not by human hands that crushes the devil. Human effort would only fail, we have to stop trying and start submitting. Yes, the rock that would crush the devil is a people who are dead to their own effort, a people who has reach the end of themselves. A people who would submit completely to God, allowing God to carve them out Himself. These are the people that would smash all the works of the devil, these are the ones that would become a great mountain and would bring down the reign of Christ on earth. We need to become this people, we need to give up our man-made structure and fall before the feet of the Lord in utter submission. Let Him carve us out Himself, let Him make us a people, a stone cut not with the hands of man.
Please comment below and share opinion. Do not forget to share this post if it blesses you - just click 'share' bellow.
Posted by David Emechete at 09:12