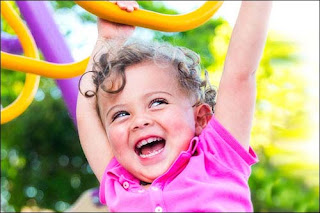 "I assure you that whoever does not receive the Kingdom of God like a child will never enter it.” (Mark 10:15).

In the verse above Jesus unveiled a spiritual principle. God is the Father and Jesus is the Son. We are the body of Christ, the members of the Son. We only have access to the things of God through the Son. This means our right to the things of God (the Kingdom of God) is based on the father-son relationship. The more we learn to be a son (the father's child) is the more we are able to obtain the things of kingdom. We could see that father-son relationship in Jesus's life; how we was totally dependent on his Father. He was like a little child under the roof of his Father.

Grown-ups are too self dependent, they have a life of their own and they are so in charge of their lives. But look at the little child in his Father's home; he relies on his father, he knows he is safe in the bossom of his father, he may not have all the details but he is sure the father would take care of him. He may not know his next meal, or how it is going to be provided. All he knows is that the father would get the meal as always, he trust the father. We worry so much about ourselves as if we are the owner of ourselves.

Have you forgotten that you died in Christ, the life you now live is Christ, it is the life of the Son (Gal 2:20). The Father takes care of the Son, the Father always takes care of the Son. Did you see in the Bible that Jesus starve to death? Did Jesus ever went to the street to beg? For the three years he ministered he wasn't involved in any other occupation. He was only occupied with the business of his Father. No one paid him salary, no one gave him tithe or offering and he didn't serve as a pastor in any church. How did he feed himself and his disciples? The Father always takes care of the Son. Would you be like a little child and trust the Father.

Your life is not your own it is the Father's business, why should you worry about another man's business? Let Him do with it however He likes, it is not your life, it is His. It is His responsibility to take care of you, you are only a child under His roof. If He can't take care of you then He has failed. Can God Almighty fail? Do you believe God can fail? Why then is it so hard to trust Him, why can't you leave it all in His hands? Be like a little child, put your cares in His hands and be free. You have nothing to lose, what the worst that could happen, you've already dead. The dead has nothing to worry about and nothing to fear.