Oppression From The Carnal Man 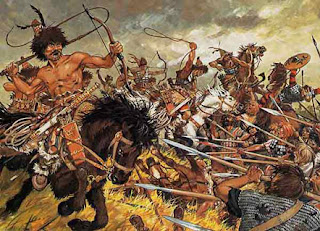 "The Midianites were so cruel that the Israelites made hiding places for themselves in the mountains, caves, and strongholds. Whenever the Israelites planted their crops, marauders from Midian, Amalek, and the people of the east would attack Israel, camping in the land and destroying crops as far away as Gaza. They left the Israelites with nothing to eat, taking all the sheep, goats, cattle, and donkeys. These enemy hordes, coming with their livestock and tents, were as thick as locusts; they arrived on droves of camels too numerous to count. And they stayed until the land was stripped bare. So Israel was reduced to starvation by the Midianites." (Judg 6:2-6).

God instructed the children of Israel to alienate the former dweller of Canaan. They refused to do that, they were too lazy and as such they just went ahead and settled with these heathens. They continue to populate and grow in numbers while ignoring the heathens. These heathens became a bone in the throat and they afflicted the children of Israel. This is exactly the kind of situation that the Church has entered into.
We were called to exterminate the carnal man — that heathen that love to worship the things of the world. We were to put an end to carnality and it race in us. But we became too lazy; we were too busy with other things. Like the Israelite we begin to live together with the carnal man; we just ignore the carnal man like he doesn't exist and we continue to grow in numbers.

Now we find ourselves in this mess where the carnal man constantly afflict us. He frequently comes out of nowhere to spoil the things we've been trying to build.
You would see a man of God who is gifted and zealous. Over time people come to trust this man of God and glorify God in his life. But all of a sudden he does something so repulsive and sinful. The carnal man comes out of nowhere and expresses himself through this zealous pastor. As such many hearts are broken, people are disappointed and they begin to lose faith in God. We come up with this wonderful idea; something that will bless people. In fact it was a revelation from God but when we try to carry out this program that ugly man raises up his head.

He comes in through fellow believers; a beloved brethren and destroy that which we've work so hard to accomplish.
This carnal man we've failed to exterminate is now afflicting us in the ground that Christ has gained for us. He is depriving us of the freedom that Christ have given us. He is damaging our name; painting Christianity with shame and ridicule. We ignore him for too long, we are too busy living our lives and growing in population.

This little children we are bringing into Christianity, what are we bringing them into? A land of affliction and frustration? We give birth to new life but they don't last long; they die in such a young age. Their faith couldn't withstand the affliction from the carnal man and their young faith dies.

Let us assemble, let us reinforce and fight back. Let us be the soldiers God has called us to be. It's time to get strategic and violent. Yes, we could do it, we can completely exterminate the carnal man from our midst. It is possible, we can put an end to him. We don't need to continue to suffer his afflict. We can have a Christianity free of carnality; a Christianity that is utterly Christ.