The Battle Against Heresy 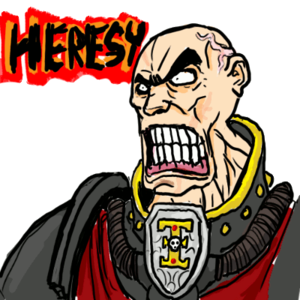 Heresy means division, any form of division or separation from the body of Christ is heresy. Since the birth of the Church and the union of Jews and Gentiles under Christ there have been a struggle of unity; a battle to keep the Church united. The problem of unity became more evident as the church expand into various gentile societies.

Hence, there were many diverse and conflicting beliefs. And they were many kind of Christianity and heresies began to arise among different Christian community. The spiritual leaders of the Church were faced with the problem, how can the Church be united as one body. Ignatius, a prominent Christian leader write to the churches that one of the elder of every church should be exalted as the head of the community. Prior to this each church is headed by a group of elders, presbyters, pastors or bishops. There was nothing like a single pastor or bishop heading a church. Even Peter refer to himself as a co-elder, "The elders which [are] among you I exhort, who [am their] fellow-elder..." (1Pet 5:1). Peter never claim to be a Pope as some Christians claim he was.

The phenomena of a single Bishop for each church emerged to combat the heresies springing up from various churches. Ignatius in his letter stated that, “It is becoming, therefore, that ye also should be obedient to your bishop, and contradict him in nothing;... Let the laity be subject to the deacons; the deacons to the presbyters; the presbyters to the bishop; the bishop to Christ, even as He is to the Father... See that ye all follow the bishop, even as Jesus Christ does the Father, and the presbytery as ye would the apostles; and reverence the deacons, as being the institution of God. Let no man do anything connected with the Church without the bishop... Whatsoever [the bishop] shall approve of, that is also pleasing to God, so that everything that is done may be secure and valid.” (St. Ignatius: Letter to the Smyrnaeans AD 107).

Ignatius of Antioch fought for the unity of the Church as such he has been called the “Doctor of Unity”. With good motive and pure intention he introduced a hierarchical power structure that is alien from Christ. God never intended that the Church be divided into Clergy and Laity, such phenomena should never have existed. This hierarchical structure does not exist in God. The Godhead is not hierarchically divided into the Father, Son and Holy Spirit; they are all equal and all united. The idea of a central head is man's wisdom, man's attempt to help God in maintaining unity in the Church. This is carnal; an act of the flesh.

The old man that should have died at the cross have been left untouched. This man had escaped the cross through Ignatius and had released this stink of impurity that desecrate the house of God. And now the Church is affiliated with this alien phenomenon of hierarchical power structure.

Just as every attempt of man to help God, the introduction of a single authoritative Bishop fail to secure the unity that the body of Christ desire. Heresies and all kind of division still continue to plague the Church. To resolve this problem Constantine, the first Roman empire to be converted into Christianity decided to call together the bishops of the Church to meet and conclude on what should be called Scripture. The idea was to have one single book as the combination of all the books accepted as Scripture. It was meant to combat the problem of each churches having a different cannon of books. There was division in the sense that what one church call Scripture is different from what another church refer to as Scripture.

Since each church has a different kind of canon of scriptures there was contradictions in beliefs or doctrines. Therefore attempt was made to have one single book of Scripture that would unit the Church in doctrine and eliminate heresies. This book was to preserve and guide the doctrine of the Church. The hope was that one Bible would lead to one doctrine and subsequently resulting into unity in the Church.

Of cause this also fail, despite the one Bible, Christianity still remain the most divided religion. The Bible remain the most debated book in history as men attempt to twist it and use it fot promoting self-interest. The Bible has failed in keeping the Church united, hence the rise of the Universal Church (Catholic means universal) and Pope. Constantine frequently call together the bishops and try to make them agree on a universal church with one doctrine. Various creed were made to ensure one doctrine and one Church. The papacy is another of man's attempt to help God unit His Church.

All bishops were to be united under one head called the Pope. This head is meant to be the representative of Christ and subsequently head the Church. He holds all authority over the Church and all Christian were expected to reverence and submit to him as to God. The Pope was responsible for holding the Church together and combating heresies or any form of division in the Church. In fact the Pope has more authority than the Bible. Thousands and thousands of Christians were killed by the Pope for the sake of maintaining unity. Historians agree that the Church killed more Christian than Nero. All kind of atrocity were committed by the Pope in his attempt to fulfill his responsibility of holding the Church together. For example the Jesuit, the anti-protestant crusades etc were put in place by the Pope to stop the breakout and keep the Church united. Yet he failed and only a segment of Christians are still under him today.

Despite all these failures we still continue to do things our way. Till today we still depend on the Bible and pastors or other authoritative head to hold the congregation together and ensure unity. The arrogant have made themselves believe that if only they could get a good Bible interpretation, a very strong and competent religious head, preach unity well enough and develop a more unifying method or strategy we would have unity. All our methods have failed, all our brilliant idea can't get unity. For almost two thousand years of trying we have failed. We should have learn our lessons by now. We found ourselves in helplessness and confusion, we don't know where else to search for unity. But there is still a place left unexplored, somewhere we've never thought the solution could be.

The solution can only be found in the spirit and "God is spirit" (John 4:24). The solution is found in a place beyond the carnal man, a land where the flesh cannot go. The flesh is dead and is subjected to the law of disintegration and decay. No wonder we couldn't find unity, for we've searched for it by the flesh while it lies beyond the flesh. We have failed to explore God in our search for unity (I am to referring to praying). The solution can only be found in the fullness of God and Christ is this fullness of God (Col 1:19). It is in the fullness of God we find sufficiency. Yes, every Christian can be united as one if only we explore Christ enough and discover the law of unity and harmony that exist in him. And as we learn to subject ourselves to this law we would have a unity beyond that which our minds can imagine.

It's time we give up our worthless effort to achieve unity. Reasoning with church leaders on the need to be united won't help bring unity. Soul provoking words won't help either. You cannot spur the people to work towards unity because they don't have the ability to attain unity no matter how hard they try. Our abilities can't get us there. We need to forsake the flesh, for we have explored the flesh in every way we can yet we couldn't find unity. It is time to go beyond 'where our feet can take us' and explore the spirit. Let go into the spirit, let explore Christ, for it is the head that is responsible for uniting the body. When the whole body is well connected to the head there would be unity and harmony. How root must be grounded deep in Christ to ensure unity. Christ is the only way to emerge victorious in this battle against heresy.