The Mystic Of The Clergy 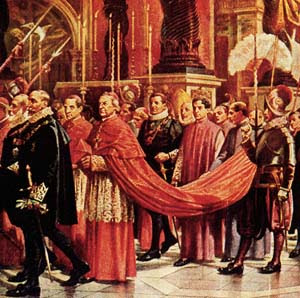 The Church was created according to the constituent of God. In God there is no hierarchy; the Father, Son and Holy Spirit are all equal. They are one just as the body of Christ is one. Christ is God, therefore the Church is the body of God and in God there is perfect equity. Yes, there may be differences in function yet all are equal. The Father is unique in His function, the Son performs a different function and the Holy Spirit has a distinct role. They all play different role but they are all one and equal. So also the body of Christ is one and equal despite the differences in the function or roles carried out by each member.

The idea of dividing the Church into Clergy and Laity is not Christ. The concept of Clergy is usually associated with an unholy mysticism. When the Church was born there was nothing like Clergy and Laity. This was later introduced as the surrounding culture began to penatrate into the Church. The pagan religion usually have priests who are believed to have a greater access to the things of the divine. They are usually associated with mysticism as they stand between the people and the unknown god.

This kind of mentality was brought into the Church. "Therefore, having been justified by faith, we have peace with God through our Lord Jesus Christ, through whom also we have access by faith..." (Rom 5:1-2). We all have access to the divine by faith in Christ Jesus. But the Church fathers of that time told the people that they cannot understand the things of the divine neither can they know them. The people were instructed to rely on a special group of people called the bishops. These were the ones that have access to the mind of God and can better interpret God.

"But God has revealed  them to us  through His Spirit. For the Spirit searches all things, yes, the deep things of God... For  “who  has known the mind of the LORD that he may instruct Him?” But we have the mind  of Christ." (1Cor 2:10,16).

We all have the mind of God and we have access to the deep things of God. But the Church fathers promoted the idea that only the bishop can better interpret God because they have greater access to God. The bishops was then divided into two; one part dealt with political issues while the other were called priests because they focus on the ceremony aspect. The Church made these priests more and more mystical. They refused to translate the Bible into any other language but Latin, prayers were said in Latin and majority of the people do not understand Latin.

The regular mass held looks something like this: a man clothed with such divine vestment walks majestically towards the altar. Opens a gigantic book, read the book in a language the people don't understand. Pick up a cup of wine with bread and says this mysterious prayer in a language that the masses do not understand. The bread is assumed to magically turn into the flesh of Jesus and the wine turns into Jesus's blood. The people standing on their feet in silence and watching in amazement even as they don't understand what the priest read from the Bible nor the prayer he had just prayed. They are in wonder of the priest ability to transform an ordinary piece of bread into the flesh of Jesus. They are stricken by awe as this mystical man performing this divine ritual.

The people go home not learning anything but yet whispering to each other about how glorious the mass was and how the fear of the Lord came upon them and they could feel his presence. It is all soulish; the costume of the priest, the massive building with it spacious hall, the paintings on the wall and the mysticism of the ritual all combine to impress upon the people a feeling of awe. It all appeals to the soul; it is a manipulation of the emotion of the masses.

The priest a fellow Christian with the same access to God as the masses have been made to look so mysterious and divine. Well, some may say it can only be found in the Catholic Church but the Protestant is also guilty of making the Clergy look so mystical. They have caused the masses to believe that only the preachers can better interpret scripture because they have undergo a training process that makes them qualified. The masses have the Bible translated in their local language but what is the need of reading it when they don't have the training required to be able to understand it.

Even the Pentecostal churches where emphases is on the gift of the Spirit are also guilty of mystifying the Clergy. The pastor mount the altar blasting tongues and exercising certain gifts of the Spirit. While the masses watch in amazement saying to themselves, "these are prophets, these are healers, these are miracle workers, these are apostles while we are just ordinary brethren“. In the eyes of the masses the Clergy are these mysterious people who has greater access to the gifts and power of God — they are not mere human beings, for they have the anointing. This is a smoking screen, there is no Christian that is a laity and we all have the anointing; "But you have an anointing from the Holy One," (1John 2:20).

Mystifying the Clergy has stopped Christians from growing into the fullness of God. It has limited us in many ways. In fact there should be nothing like Clergy. That hierarchy associated with the Clergy is not Christ. The structure should be God then Jesus in between and then the Christian. Not God at the top, followed by Jesus, next is the Clergy and at the bottom the Laity. There is no rank among Christians, we are all one body growing together into the fullness of God. Yes, God desire fullness for not just the Clergy but every Christian.
"till we all come to the unity of the  faith and of the knowledge of the Son of  God, to a perfect man, to the measure of the stature of the fullness of Christ;" (Eph 4:13).