The Battle For The Promise Land 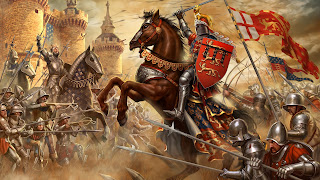 "Even before he made the world, God loved us and chose us in Christ to be holy and without fault in his eyes." (Eph 1:4).

Just as God picked and selected Canaan from of the world to be conquered by his holy nation and filled with holiness, God has also selected a people from among the world to be conquered by the Son of His holiness and filled with this holiness. The Israelites were to take this land (Canaan) and fill it with nothing but themselves, so also Christ is to take this people and fill them with nothing but himself. And just like Sodom, Gomorrah and the rest of Canaan the world was filled with idolatry, blasphemy, corruption, sin and all kind of evil. Then through Jesus the Father released His life into this world. This life came to man and through the Spirit it begot many sons. As such you find the sons of God in this flesh; this flesh that was once dominated by the carnal man and ruled by death and sin.

Canaan was first dominanted and occupied by heathens, but then God released his children to take over this land and totally annihilate the heathen (see Deuteronomy chapter 7). They were to totally flush away paganism together with the heathen men. So also God has released the sons upon the flesh to chase annihilate all that is carnal, so that it can be filled with nothing but Christ. Right there in the flesh the battle line was drawn; the sons of God versus the carnal man.

"In hope of eternal life, which God, that cannot lie, promised before the world began;" (Titus 1:2)

Before the beginning of the world a promise was made; a promise that eternal life would one day occupy and dominant the flesh. The sons are offspring and product of eternal life, hence, Just as God promised Abraham (the Father of Israel) that his offspring would inherit the land of Canaan, God had also promised the everlasting father (Christ the eternal life) that his offspring would inherit the flesh. And now the sons must battle against the formal occupant of this flesh. Yes, the carnal man must be defeated and the sons must take over the human body.

The sons of God cannot sin; they have never sin and can never sin because sin is alien to them. Sin is only a thing for the carnal man, he (the carnal man) has damaged, corrupted and defiled the flesh with sin. But this flesh is the promised land and the sons must get rid of these pagans and take over the land. The sons must take over the flesh to be able to express themselves fully through the human body. The sons must be manifested through this human body.

"For the earnest expectation of the creation eagerly waits for the manifestation of the sons of God." (Rom 8:19).

"For the earnest expectation of the creation eagerly waits for the revealing of the sons of God. For the creation was subjected to futility, not willingly, but because of Him who subjected it in hope; because the creation itself also will be delivered from the bondage of corruption into the glorious liberty of the children of God. For we know that the whole creation groans and labors with birth pangs together until now. Not only that, but we also who have the firstfruits of the Spirit, even we ourselves groan within ourselves, eagerly waiting for the adoption, the redemption of our body." (Rom 19-23).

Yes this body would be redeemed, it would be set free from the reign of this carnal man. The sons would be victorious, for this is the promised land. We would overcome the carnal man, take over the flesh and freely be the sons that we are. We are called to annihilate carnality from our flesh and be utterly begotten; utterly holy as the Father who begot us is holy.