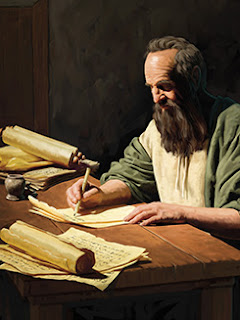 "But thou hast fully known my doctrine," (2Tim 3:10).
The Church today has developed this culture of taking the New Testament, picking whatever they like and producing a doctrine out of it. We've been trying to rediscover the early Christian doctrine but we've gone about it the wrong way. We try to understand Paul's doctrine through his letters but Paul's letters contains a lot more than just his doctrine.
The American College Dictionary defines doctrine as “a particular principle taught or advocated; a body or system of teachings relating to a particular subject; dogma, precept, belief.” So doctrine, in its broadest sense, could be any teaching or belief taught by anyone. The primary Greek word used in New Testament texts is didachē : “In an active sense it means the act of teaching, instructing, tutoring (Mark 4:2; 12:38; 1 Cor. 14:6, 26; 2 Tim. 4:2); in a passive sense, teaching which is given, that which anyone teaches, the manner or character of one’s teaching (Matt. 7:28; 22:33; Mark 1:22, 27; 11:18; Luke 4:32).
What we mean by Paul's doctrine in this article is the core teaching of Paul on what Christianity is really about. These are the teachings and belief from which the practice of Christianity is composed. What is the Christian reality according to Paul? What constitute Christianity as Paul would teach? How does Paul sees what we now call Christianity? What does Paul present to those who what to know about this new faith? These are the questions this article seeks to provide answers to.
Paul, as most Christians would agree is the greatest Christian that ever lived. He had the greatest insight of the faith. Like I mentioned before Paul's letters doesn't just contain his doctrine (i.e his view on Christianity) but it also contain instructions, advice, encouragement and admonitions he gave to churches and believers.
The letters where Paul really talked about the Christian doctrine is Romans, Galatians, Ephesians, Colossians and Hebrew. Yet most churches today draw their doctrines from Corinthians and Timothy. Most of their Christian practice is based on these two letters. Corinthians is not a doctrinal book but it was written to address certain issues in the Church at Corinthians. The letter was written to Christians who Paul had already presented his doctrine to. The letter was meant to address issues that has now plague the Corinthians church, it wasn't meant to present the core doctrine of Christianity. In this letter Paul mentioned that, "When I came to you, my friends, to preach God's secret truth, I did not use big words and great learning. For while I was with you, I made up my mind to forget everything except Jesus Christ and especially his death on the cross." (1Cor 2:1-2).
Paul approached the Corinthians with the assumption that they already know the Christian doctrine because he had already told them. Therefore Paul wasn't writing about the Christian doctrine instead he was directly dealing with the challenges they were facing as a church.
"I made up my mind to forget everything except Jesus Christ and especially his death on the cross." (1Cor 2:2).
From this verse we can see that the doctrine that Paul had previously presented to the Corinthians was nothing else but the teaching about Jesus and his death. He didn't preach don'ts and dos, a system of rules and regulations, a way of morality or a list of commandments and instructions. All he taught was a person, this person is his doctrine. Paul wasn't the one that planted the church in Colossi but when he discovered they've missed it in their beliefs and practices he decided to present the Christian doctrine to them. And do you know what he wrote about? Well, he didn't write about the kind of dress they should wear, the way they should worship, the way women should be treated during worship, the time and day to meet etc. But all that Paul described is this supreme being who stands at the center of all things and who is all in all. All Paul talked about was Christ. Paul was to teach the church at Colossi how to practice Christianity and all he explained was Christ.
Christ is the Christian teaching and practice. We do not practice a religious system, a kind of morality or a list of rules and regulations. We practice a living breathing person. Religious Christians would find it difficult to accept this kind of doctrine because they what don't and dos that they can easily follow. They don't know how to live by the life, they only know how to live by the knowledge of good and evil. The Christian doctrine is life not a knowledge of good and evil. Therefore you cannot just storm into the Bible, gather a list of things that are good and things that are evil and then call it the Christian doctrine. In fact the Bible cannot contain the Christian doctrine because the doctrine is a living person. The Christian doctrine is alive and he lives in us. Therefore we practice Christianity by living and expressing this person that lives in us.
Please comment below and give your opinion. Do not forget to share this post if it blesses you - just click 'share' bellow.
Posted by David Emechete at 13:41