A New Specie Has Emerge 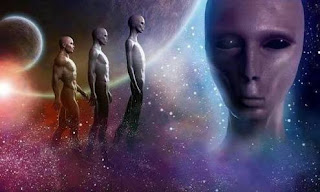 There have been a growing consciousness and an awareness of the weakness of this human species. Look at Hollywood, what do you see? Stories about alien aviation (alien of a superior species and intelligence); the evolution of a higher species (men with super powers); the emergence of an uncontrollable disaster or epidemic; the procession to self-destruction; the failure of the human species; the inability of the human race to save themselves etc. It is an undeniable fact that man is suffering from the fear of his weakness and his unavoidable trip to self-destruction.

Yes, we have come a long way in science, we have all this knowledge and inventions and as a result we take pride in our achievement and exalt ourselves. But beneath our pride and self-exaltation lies the fear of the weakness of our mortality. We fear that we are weak, and we hate this weakness. Oh! How we try to cover up our weakness; we try to dress it up, make it look good and even admirable. But it is ugly and the truth is that we are so ashamed of it.

Out of dread and driven by this fear we crave for control and power — it is only the weak that crave for power. We struggle to have a sense of control, we suffer from the overwhelming feeling of insecure and this ugly feeling tortures us. Like a slave struggling for a thirst of freedom, we pursue control and power. And we chase knowledge all for the sake of getting some kind of power and control. They say, 'knowledge is power' and we pursue this power like wild animals hunting for a prey. But no matter the amount of knowledge we get we still find ourselves void of power and control. We are helpless in the face of death — we can't stop ourselves from dying, we have no control over death. There are so many things we can't control, for we are just too weak.

We try so hard to fight it, to overcome our weaknesses and to have no fear. But being brave won't change anything. We try to be better, to be the best we can be. But we keep failing at everything; we can't exercise control over ourselves, can't control our actions, we are slave to our emotions, our desires, our surrounding circumstances. We can't help ourselves, we look up, and we see that destructive-end staring at us and welcoming us into his arms. We have a tendency to self-destruct and it's scary. We know that all our activities and our actions would only lead to the destruction of ourselves, the destruction of our world, the people around us and even the destruction of the earth. But we can't stop ourselves, we are like a time bomb set to blow up at a point in time. We know we have to change this path of self-destruction and be a better person, but we can't because we are just too weak. So we look for a way to strengthen our volition and take back control.

We turn to the power of motivation and all kind of soulish manipulation for help. We read and write motivational books, listen to and make motivational speeches, study and employ soul manipulative methods but it is not taking us far enough. Nothing we do ever works, there is something wrong with our species. We are on the course of self-destruction and there is nothing we can do about it. We can't stop ourselves, we are being led like sheep to the slaughter. We have come to the awful realization that our species is destined to self-destruct.

"The first man was of the earth, made of dust; the second Man is the Lord from heaven." (1Cor 15:47)
A second Man had come from heaven, a new Man, a Man of a different species and this new Man is Jesus Christ. He is of a far better and glorious species, for he is the glory of God.
"He [the new species] is the sole expression of the glory of God [the Light-being, the out-raying or radiance of the divine], and He is the perfect imprint and very image of [God's] nature," (Heb 1:3a)
Christ has the power of turning others into his kind. Yes, he could make an old species transform into a new species. And he is doing it already, all those who submit to him and ask for a regeneration are being transformed into a new specie. This regeneration could only occur through the rebirth i.e being born again.

The old species would die because that is it destiny but the new species would live for eternity. Do you want to continue being that old, weak and self-destructive species? Or do you want to be reborn into a new, glorious and eternal species? It all left for you to choose. But for as many that choose the new species the Lord has promise, and he had already started "bringing many sons to glory" (Heb 2:10). So choose wisely.