I See Satan Falling From The Heavens 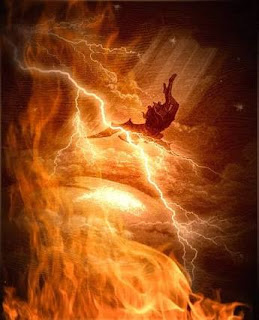 The Kingdom of God has invaded this world, the power of God's name is being unveil in the midst of mortal men. A new authority is contrasting the power that rule this world. There is upheaval in the heavens, a great turmoil has stricken the spiritual rulers in the heavenly places. The throne that rule this wicked world is being shaken and the king of the world has lost his balance.

The sons of God parade the earth, walking among man and releasing the power and the law of an alien kingdom — the kingdom of God. The throne in the heavenlies has become too hot for Satan, one more blast from the glorious procession of the sons and Satan will completely lose his balance. These sons would not hold back, with great power they unleashed again the reality of the kingdom of God. And like an atomic bomb the smoke rises up into the heavens displacing the principalities and powers in the heavenlies.

Satan was bedazzled, he staggered and fell off from his place of power. I see him like lightning falling from the heavens, he has been knocked down by the invasion of the Kingdom of God. You rejoice because you see the devils subject to you, that's only a sign of the invading kingdom. And what more, I have given you authority to trample on snakes and scorpions and to overcome all the power of the enemy; nothing will harm you. Just go and be sons, continue to unleash the kingdom everywhere your feet touch, continue to cause avock in the heavenlies.
Paraphrase from Luke 10:17-19