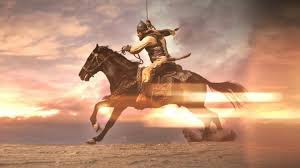 For too long I have been restrained, made to wait till this very moment. But at last, the fullness of time came and I was unleashed. With a long boiling rage and with a consuming passion I descended into the world of man, penetrating the raging battle between light and darkness. That battle that seem unending, that very battle that has worn out all of man's resources, leaving man utterly helpless. I have intervened, sweeping in with all the love in my heart to rescue man. I have come face to face with the enemy, the tyrant king of this wicked world. And with one mighty strike, I brought him down, breaking his hold over man and stripped him of his power.

That dreaded dictator, now lies helpless on the floor, he has been brought to nothing. The devil is no longer the king of the world. A new ruler has emerged, I the anointed of God, the rightful heir to the throne has revealed myself. I have displaced the false king and I have mounted the throne promised to me by my Father. Behold, I'm enthroned king of all creation; all authority in heaven and on earth has been given onto me. You who had witnessed this event; you who have watched me struck down the devil, you who had beheld satan fallen as lightning from the heavens  (from his reign), go and announce this, tell it to all. Tell them how you witnessed me gloriously enthroned as King of all of creation. Make them know the final outcome of the battle between light and darkness. For darkness has lost and wickedness has failed; the devil is no longer king of the world. Truth and justice now triumph. Declare, that God's anointed now sits on the throne — Jesus is the new Lord!

Declare it everywhere, let all of creation know. Go! Go now, ride on horses back, take with you the testimony (the proof of my authority). Yes, go into the streets, into the heart of every city, declare that Christ is on the throne, declare the glory of my victory and the majesty of my enthronement. That all might be struck with awe, falling on their knees at the sighting of the greatness of my reign.