Christ Is The Prophet 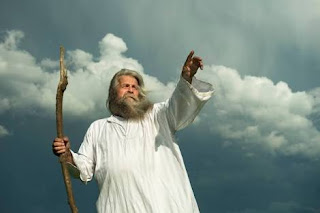 When the Children of Israel complained that they could not bear God's voice, God said He would raise "a Prophet". The word used was singular, this means God was referring to a particular prophet. The Jews and their rabbi had always understood that this prophecy would one day be fulfilled in a literal way by the coming of "the Prophet" which is the Messiah. The Jews knew that God was referring to the Christ. The day God spoke that word marked the beginning of the era of prophets in Israel (before then the Israelites have never had any prophet in all of their history). When God said He would raise a prophet He was referring to Jesus but we found that God raised several prophets before Him. These prophets were meant to be prefigure of the coming Prophet. They were meant to give the children of Israel an idea of what the Prophet would look like.  So we find that the main purpose of the office or function of prophet in the life of the Israelites is to stand as a guarantee of the promised, a prefigure of the reality and a forstate of that which is to come. And he is now here, he is the Christ, Jesus.

"Long ago God spoke many times and in many ways to our ancestors through the prophets. And now in these final days, he has spoken to us through his Son. God promised everything to the Son as an inheritance, and through the Son he created the universe" (Hebrews 1:1-2).

Christ is the prophet; he is the consummation of the prophet. All other prophet before him are mere prefigure, type and pictures of him. He is the essence, the meaning and purpose of prophet. Every other prophetic function carried out before him were simply meant to lead to his coming. He is the final destination, the finished line of that which is called prophet. Ever since the beginning, God had been speaking and speaking through human vessel known as prophet but it got to a point where His very word came down from heaven in flesh. The embodiment of all that He had said and all that He would ever say is now here in flesh. The Word of God no longer need to come through human vessel, he has gotten his own body, he has become flesh and now lives with us. All these while, the Word had to depend on the people we call Prophets to speak him down from heaven but now he no longer needs that. He has gotten his own body, he has come down from heaven himself, he is here now!

Do you understand what this means? We no longer need to depend on Prophets to speak down God's word, His Word has become flesh (he walks the earth) and we can run to him anytime, to experience the word of God for ourselves. We can reach out for ourselves and touch the Word, we can apprehend it whenever we want. The era of the prophet has reached it end, its very purpose has been fulfilled and now the Prophet, the original one, the promised one, the very reality, he is now here. He lives with us and even more, he lives in us. We have become the body of the Prophet.

To learn more you can get my book The New Covenant