The Glory Of The New Covenant 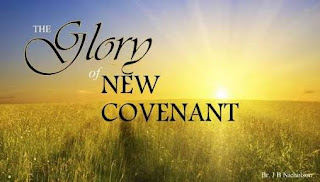 We find Christians constantly desiring things that is of the Old Covenant, it's almost like we do not understand the value of the New Covenant. We keep wishing for the miracles, the practices, and the dealings of the old testament. Borrowing practices from the old testament and wishing that God will manifest Himself like He did in the old testament as if these things are superior to that which is available in the New Covenant (for those who are getting confused because of the way I'm using the words covenant and testament, both words actually means the same thing). The practice we have in the New Covenant is far greater than that in the Old, the manifestation and dealings of God that is found in the New Covenant is immeasurably greater and superior than that in the Old Testament. Many of us are just too blinded, too carnal to see these things. Look at what Paul said;

"The old way, with laws etched in stone, led to death, though it began with such glory that the people of Israel could not bear to look at Moses’ face. For his face shone with the glory of God, even though the brightness was already fading away. Shouldn’t we expect far greater glory under the new way, now that the Holy Spirit is giving life? If the old way, which brings condemnation, was glorious, how much more glorious is the new way, which makes us right with God! In fact, that first glory was not glorious at all compared with the overwhelming glory of the new way. So if the old way, which has been replaced, was glorious, how much more glorious is the new, which remains forever!" (2Cor 3:7-11).

"The prophets, who prophesied of the grace (divine blessing) which was intended for you, searched and inquired earnestly about this salvation" (1Peter 1:10).

The people of the Old Testament, those who God has allowed to take a glimpse of the New Covenant long desperately for it. They hungered to taste it, to experience it. The New Covenant was a mystery to them, they saw it but they never knew it, they could never experience it. They would give anything to be in our place right now, but look at us. It is foolishness for a Christian to prefer the Old Covenant or try to mix it with the New.

"Assuredly, I say to you, among those born of women there has not risen one greater than John the Baptist; but he who is least in the kingdom of heaven is greater than he" (Mat 11:11).

John the Baptist was a man under the old covenant, although he was the greatest of all the people under the Old Covenant yet the least person under the New Covenant is greater than him. This means that the most naive and immature Christian is far greater than Elisha, Elijah, Moses, Solomon, Samson, Isaiah, and Daniel put together. The glory he possess will make those great prophets look like children playing with sand. If only we know how significant the New Covenant is, we would let go of the Old and dive deeper into the new reality that our Father has gracious given us.