The Warlord Of Hero Worship 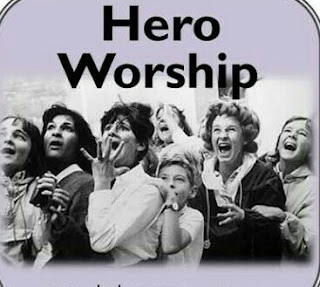 The devil is only able to touch us or harm us in the realm of the flesh, outside that the devil has no power. Hero worship is something embed in the nature of the fallen man. As the feeling of our weakness overwhelms us we search for someone we would like to perceive as being stronger in the area of our weakness and venerate such a person. This becomes dangerous when it limit us from growing stronger and causing us to remain in our weakness. This is the root of religion, in fact people worship gods because they feel these gods are big and mighty while they are small and weak. It's an unhealthy projection of out weaknesses. This is just the way fallen men deals with their weaknesses. The devil has capitalize on this aspect of the nature of man and has used it to rule over man for ages.

Hero worship started attacking the Church when Christianity was brought to the highly paganized Gentiles and after the death of the apostles. It gain a stronger grip when Christianity became the official religion of the Roman Empire. The Church degraded and there was hardly any miraculous signs and wonders in the Church. This weakness and many other factors cause the Church to turn to the apostles and start worshipping them. Worship here is not just calling them gods and physically bowing down to them, but any unhealthy veneration. They paint pictures of the apostles with light on their heads (to indicate divinity) and they call them saints. They build cathedral in the name of the apostles, made images and status of them and started saying prayers to the apostles and Mary the mother of Jesus.

Well, I think we know the rest of the story... Catholic still exist today. But before we start pointing fingers and saying "yes it is over there among the Catholic and it has nothing to do with us", let us examine ourselves properly. It may not be pronoun as it is among the Catholic but it is there, yes the warlord of hero worship has a grip on us all. You hear the Protestant talk about Paul: "Oh! the great apostle Paul, look at all the powerful things he wrote", "who is like Paul?", "No one could ever be like Paul", "Look at all the revelation he had, tremendous!" and they go on and on, bowing down to worship the great apostle Paul. And not just apostle Paul but also other writers of the Bible, we debate about which writer is better and whose is our hero. Isn't it true? Have I in anyway make a lie? Look carefully, didn't you see how obsess the Protestant are about the writers of the Bible? "Oh! They just wish they could be like them but they are just too weak, these writers are divinely ordained, they are special people and non of us could ever write like them neither can we have the kind of revelation they had. In fact when they were writing God took hold of there hands and wrote by Himself, such thing doesn't happen again in our time because we are too weak and too unholy." Isn't that the thought that runs through our minds? We idolize the writers of the Bible and there works. What makes them so special, are they not Christians just as we are Christian, isn't it the same Christ that they had that we now have? We worship not just the apostles but also our pastors, our so called father in the Lord and some important man of God in history. I heard somebody saying that the general overseer of their church is no longer a human being, he had become something else, blah... blah... blah... What then has he become? A god? Another pastor even said he wish he could worship his general overseer.

Open your eyes! these people are mere mortals, they are human being like you and I. They have the same Holy Spirit that you and I have, they serve the same God that you and I serve and they are followers of the same Jesus that you and I follow. They are just our fellow brethren. No one was specially ordain to write the Bible, in fact God didn't intend for us to have a religious book. The only thing that God gave us is Christ, He didn't give us any book. He gave us Christ so that Christ might become our all, Christ is our religion book, he is all that we should read.

"clearly you are an epistle of Christ, ministered by us, written not with ink but by the Spirit of the living God, not on tablets of stone but on tablets of flesh, that is, of the heart.... who also made us sufficient as ministers of the new covenant, not of the letter but of the Spirit; for the letter kills, but the Spirit gives life." (2Cor 3:3,6).

The New Covenant has nothing to do with letters that kills, rather it is utterly Spirit. The apostles are not Moses, God didn't call them to a mountain and handed them a book. We need to wake up from the clutches of hero worship. These people are men just like us and they wrote the Bible the same way a man of God today writes a Christian book. God didn't take hold of there hands but He inspired them through His Spirit the same way He inspires His children to write Christian books today. They were merely instrument of God and God can use anybody, but it is unholy for us to go and start worship the instrument that God uses.

So let repent from this unholiness, for it has stopped us from growing the way we suppose to. God want the Church to grow, He wants to give us greater revelation than what Paul or any other writer of the new testament had. But we limit ourselves when we say "there can be nobody as great as Paul and we can never have the kind of revelation that he had". This warlord of hero worship has imprisoned us, put us in bondage and stop us from growing the way God wants us to grow. But we won't remain captive, for we must break free and defeat this warlord. Yes we would come to see the apostles as they really are: our beloved brethren in Christ whom God had greatly use for our salvation. For the writers of the new testament are nothing more than that.