The Warlord Of Papacy 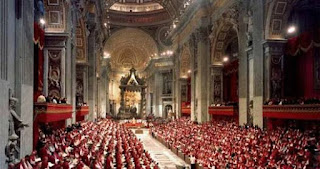 The greatest weakness of man had always been pride, everybody has a degree of pride and that seems to be the inroad of the devil into our lives. The nature of the falling man is to rule over his brothers. Everyman wants to rule over the other, to be ranked above the other. This is an in-depth constituent of a falling and carnal man. And as a result you find that there can not be equality in this world, in fact it is impossible for equality to exist. Everybody has someone who is rank above him and everybody wants to be rank above somebody.

But when we got born again our nature was changed and we were transited from this world and it system into Christ and his kingdom. In Christ there is no rank but perfect equality. Nobody is set as head over the other but we are all brothers and sisters in service. As we serve Christ our head we serve each other because the body of Christ is Christ himself.

"Do not call anyone on earth your father; for One is your Father, He who is in heaven. And do not be called teachers; for One is your Teacher, the Christ. But he who is greatest among you shall be your servant." (Matt 23:0-11).
We are all servants and we are all in service to each other, there is no rank but perfect equality. Equality doesn't mean we have all attain equal spiritual level, yes some may be spiritually matured than others but there is no one vested with the power to exercise authority over the other.

Over time as Christianity began to form we started bringing in things that are of the world into the Church. In Christianity today we see a phenomenon that is alien from Christ. It is the papacy, an alien phenomenon that have invaded Christianity. We try to prove that this phenomenon is from the Bible but is not what Christ preach. The papacy originated from ancient Rome. The founder of Rome, Romulus chose the first settlers of Rome to assist him in ruling. These men were called the Senate (Senate is from a Greek word that means the old men). The descendants of these Senate were called the Patri i.e papa or fathers. When Constantine became the first Christian emperor in Rome he gave the church leaders one of the greatest and ancient political and social status - the Patri. Church leaders were now refer to as fathers. Still today Church leaders still carry this status.
However the Bible reveal that Christ wasn't planing to anoint some people with power in order to rule the Church. Such concept can only be found in the world. God didn't want Israel to have a king but He wanted to rule them Himself. Although the Israelites had elders, leaders and judges (Jos 23:2) but non of them were anointed rulers. The different between one who is anointed to rule and one who is just a leader is that the one anointed to rule is carrying out a mandate and authority had been given to such therefore others are obligated to obey him.

But the other that is just a leader is carrying out a service, he has no delegated authority and people only obeys him out of respect. Israel had these leaders but they look into the world and said "appoint a king to rule over us, so that we will have a king, as other countries have.” (1Sam 8:5). God was trying to use Israel as a prefigure of how His kingdom would be when it is established on earth.
"And have made us kings and priests to our God; And we shall reign on the earth.” (Rev 5:10).
This is how the kingdom of God is: a place were everybody is king and there is no inequality. And Christ is the kingdom of God on earth, for anybody who is in Christ now enjoys the reality of the kingdom. Therefore we are all kings and there is no head except Christ the head of the Church.

The devil, that serpent that entered into the garden of Eden to deceive man always find his way into the midst of God's people to corrupt them. Yes, the warlord of papacy charged into the Church and messed up everything. He took God's people captive and they began to crave for authority. They delegated authorities to themselves, anointed themselves in the name of God and started ruling over their fellow brothers and sisters. God's people became enslaved by this warlord and his system. Generation after generation the warlord of papacy reigned and his system became the norm of the Church. We have little consciousness of our enslavement and we just continue to do what our fathers had taught us to do. We continue to anoint leaders and put people in place of authority, and we call those in the place of authority "papa", "father" etc. This is in contrast with what constitute Christ and therefore it is unholy.

Look at the Church, dirty politics in the house of God. Greediness, envy and pride has taken over God's people. Brethren getting drunk with power and doing unthinkable things; brethren worshipping fellow brethren as if they are gods; children of God being mislead in the name of submission to authority; strife and conflict in the midst of God's people. Everybody wants to have a position, we struggle and compete: you find the law of survival of the fittest among people who are suppose to be a new creation. New creation behaving like animals, carnal men, men of the old creation. What then is the difference between the Church and the world? Is this the testimony we are called to bear?

We must purge ourselves of this unholiness and fight against this warlord of papacy. Open your eyes and see that this is not normal. Yes it is true that Paul once said to the church in Corinth "For even if you have ten thousand guardians in your Christian life, you have only one father. For in your life in union with Christ Jesus I have become your father by bringing the Good News to you." (1Cor 4:15). The King James Version put the b part this way: "for in Christ Jesus I have begotten you through the gospel." Paul was talking about a service, he didn't say he was there father because Jesus appointed him as there father but that through his service he has begotten them and therefore they should respect him as their father. He wasn't exercising an authority vested in him through the anointing but he was demanding a respect that he has come to earn through service. Paul later told this same church that "We're not in charge of [or dominate] how you live out the faith, looking over your shoulders, suspiciously critical. but [rather that we work with you as] fellow laborers [to promote] your joy, for you stand by your own faith, not by ours." (2Cor 1:24).

Let not confuse service for appointment and respect for authority, there is a huge difference between them. Let not take that which is of the flesh, carnal and worldly and bring it into the Church. You don't need to be appointed to serve among God's people, we are all given gifts by which we can serve one another and these service is what the Bible calls ministry. Ministries are not anointed positions and ranks but are services among brethren.

Now I think I have gone far enough in clarifying things so as to avoid attacks from my beloved brethren. Nevertheless my message is that we need to be awaken to the reign of the warlord of papacy in our midst and we need to fight against him. And the way we do this is my acknowledging the constituent of Christ and try to do things as it is in Christ. And victory will be ours for we are overcomers.