The Warlord Of Polemics 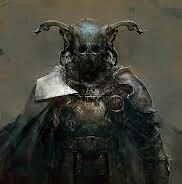 It is time we become more conscious of the raging battle, for we have loss so many territories to the devil. And these territories had been subjected to paying tribute to the devil's warlord. Little do we know of our enslavement to these warlords and it is time for our eyes to be open to the reality of the situation of the war. As we all know there have been this great and persisting division among God's people and every attempt made for reconciliation has failed. Yes we have a combine Christian Association but such union is not truly the unity the Lord desire for His people.

The division all started or rather became more pronounced when Christianity descended to a point of decay. This happened at the peak of the reign of the Roman Catholic, were men became gods and ruled over the Church that belongs to our Lord. The people of God wanted to break free from the clutches of men and they wanted true Christianity. The search for true Christianity lead the people to discover that they have not been following the Bible. This brought about the cry for 'Solo Scriptural' — the agitation that we should return to the Bible and be true to the word of God. This agitation sparked the division that continued till today. Everybody is trying to be true to the Bible and each group or denomination thinks they are the ones that are doing it correctly while others are not truly following the Bible.

There, the spirit of pride rage into the Church and strike down many of our people and that is when the warlord of polemic took over. He captured the heart of God's people and exercise his reign upon them. As a result brothers begin to fight against each other because of doctrine. Division became more pronounce as pastors climb the pulpit mainly to criticize another ministry. There are those who's ministry is to criticize others; criticism and attacking fellow brethren has become a ministry to many. Even the very elect are falling into the trap of this warlord.

Once God opens a man's eyes to a truth in the Bible he runs off with it and start feeling like he is higher than his brothers. He goes about debating and arguing with his brothers, and in his eyes everybody had gone astray except him. Oh, how he criticizes and find fault in every ministry that is not his and in his eyes his ministry is the only one that is genuinely from God. The holiness preachers believes the prosperity preachers are deceivers, the faith preachers says the spiritual warfare preachers are extremists and then the 'win souls' preachers accuse the spiritual growth preachers of not fulfilling the great commission. And each one of them thinks they are the general secretary of God - they alone possesses the knowledge of God's heart and follows God's will perfectly. It is nothing but pride and the manifestation of the reign of the warlord of polemic. It is as a result of the absence of love.

"We know that we all have knowledge. Knowledge puffs up, but love edifies. And if anyone thinks that he knows anything, he knows nothing yet as he ought to know." (1Cor 8:1-2).

Yes, that is just the problem, knowledge without love. It causes one to rush at his brother with heavy stones of criticism. Love may criticize and rebuke but he does it with a heart pierce with many sorrows. Love can't stand to watch his brothers being criticized, it provokes him and when love rebukes he does it with grief. Love doesn't want to see fault in his brothers, he is not quick at finding fault in others and when he does find fault he seeks to correct and not to condemn. Even if the brother refuse to accept correction love would never condemn.

Love is the way we can defeat this warlord. Do not just seek for knowledge and revelation but seek for love or else you would end up as a captive of this warlord. We must learn to emphasize love over and above knowledge if we are to win this battle, for this battle is real. Check yourself, don't you feel the huge to place your doctrine over and above that of others? Don't you feel like your church preaches the truth that many churches haven't realize? Aren't you having that huge to criticize others? To boast and say "yes others haven't realize this and that" and "look at how knowledgeable I am and all the truth I have come to discover". Come to think of it, what good are all those knowledge to you? Many of us are not allowing these knowledge impact us but yet we boast of it. Open your eyes! Can't you see that raging battle in you. A battle to bring you to criticize and attack your brothers. It's the warlord of polemic trying to maintain the division and cause even more division in the Church. We can't have this, we won't allow the devil defeat us and we must break free from this warlord. But the weapon to defeat him is love, yes love above knowledge and we would humiliate this warlord. We would break free from him and bring him to his knees and then he would be abolished from the Church - from the midst of the people of God.