The Last Is The First 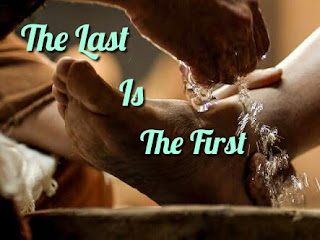 "So the last will be first, and the first last.” (Matt 20:16).
This is the principle of the life in Christ. Those that are first are last and the last are first, it is wisdom in a mystery.

"For it seems to me that God has given the very last place to us apostles, like people condemned to die in public as a spectacle for the whole world of angels and of human beings. For Christ's sake we are fools; but you are wise in union with Christ! We are weak, but you are strong! We are despised, but you are honored! To this very moment we go hungry and thirsty; we are clothed in rags; we are beaten; we wander from place to place; we wear ourselves out with hard work. When we are cursed, we bless; when we are persecuted, we endure; when we are insulted, we answer back with kind words. We are no more than this world's garbage; we are the scum of the earth to this very moment!" (1Corinthians 4:9-12).

Do you see that in actuality the "first" means they are the highest servant. They are the servant of the servant, the least of the least. They are greater slaves, the lowliest, because the yoke placed upon them is great. Paul's statement is like bringing a group of poor people in order to rank them based on their level of poverty. They are to be ranked from the poorest to the least poor (i.e. the ones that are not too poor). Hence, you say, "the first is Tom" i.e Tom is the poorest, he is at the top of the hierarchy of poverty-stricken people. It would be foolish to crown Tom and call him king. He is the poorest, it is not a thing to celebrate or boast of. In Christ those who are first do not boast, for it is not a thing to boast about, instead it humbles you. You are the least of the least, a servant to the servant, such a position would do nothing but humble you.

The first are not found on the high table, rather they are at the door, washing the feets of those coming in. They carry a greater burden to care for the whole Church, to wipe the feet of even the least of the least in the Church. They serve everyone; they are the servants of the servants, the slaves of the slaves. These are those who are last and that is why they are first. And they will continue to be first as long as they are last. Today's Christians have this mentality that apostles occupy the highest rank and they sit like kings among the people of God, clothed with royal robe. Some Christians call themselves apostles carrying their shoulders high and feeling like they are at the top of the world. The true apostles are the greatest least i.e the least of the least, the servant of the servant. According to the Bible, the apostles are followed by the prophets who are next to the least of the least, and then we have the evangelists, the pastors and teachers.

As a body we are all mutually serving one other. We are one big family caring for one other and carrying out services for one another. Those who serve the most, those who come down to the very bottom of service are those who are the first.