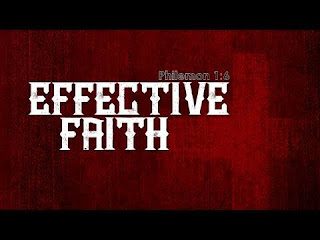 Fixing your eyes on this revelation will provoke faith in you, causing you to become so confident because you know how powerful God is and how much He loves you and is willing to do anything for you. However, having great faith is not enough. If unbelief is present in your heart it can counter your faith and make it ineffective. Yes, it is possible to have faith and have unbelief at the same time.

"And straightway the father of the child cried out, and said with tears, Lord, I believe; help thou mine unbelief." (Mark 9:24).

This man is saying he has faith and unbelief at the same time, and look at what Jesus said next in Matthew's narration of the same events.

"Jesus said unto them, Because of your unbelief: for verily I say unto you, If ye have faith as a grain of mustard seed, ye shall say unto this mountain, Remove hence to yonder place; and it shall remove; and nothing shall be impossible unto you." (Matt 17:20).

Here is Jesus saying even if your faith is as small as a grain of the tiniest seed in Israel, as long as there is no unbelief it will move a whole mountain and do things that are considered impossible. The problem is not the size of your faith, but the presence of unbelief. So how do we deal with the problem of unbelief? We are not in total control of the things that passes through our minds or hearts, but we determine whether or not to embrace these things.

"Behold, I stand at the door and knock. If anyone hears My voice and opens the door, I will come in and dine with him, and he with Me." (Rev 3:20).

It requires you taking your eyes off of Christ and fixing it on the unbelief that has presented itself to you before you can be considered doubtful. As long as you have not embrace that unbelief presenting itself in your heart, you have not doubted. Now the problem is that many Christians have a very undisciplined mind that just accept anything that present itself to them. Their minds are not discipline enough to be able to rebuke things and block them out. In fact, these Christians don't know how to rebuke and block things out of their hearts, they begin to struggle and struggle with this unbelief, and it end up affecting the effectiveness of their faith.

When you begin to fight with unbelief or doubt you get distracted. The victory has already been won, it is finished! We are not called to begin fighting a battle that has already been won, we are called to rest. Don't waste your time fighting unbelief, just rest your eyes on Christ, ignore, rebuke and block out the doubt and unbelief, focus on who Christ is, for he is the power of God, and the love of God towards us. Therefore, what you need in order to have a faith effective enough to do the impossible is getting the revelation of Christ and training your eyes to stay fixed on it no matter what.

Let your eyes just rest on him, and do not allow anything disturb that rest, for we are called to rest. As you practice this you will grow in it. You will grow in resting in Christ and in keeping unbelief out, and then your faith will become more and more effective.