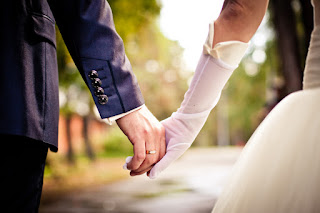 When I think about our oneness with God, it's just so astonishing, the only thing I could compare it with, the only thing that gives it a form in human term, and allow my human brain to be able to comprehend it is marriage. A young lady born in poverty, lived in the slump all her life. Poverty is all she has ever known, her company is with the poor of the poor. Her family line has only known poverty, generations after generations it has been like that. This is her history and her destiny. She could not have imagine anything for herself or her future other than poverty—she has accepted and embrace that.

Then all of a sudden, the king noticed her, and for some reason he fell in love with her. Immediately he picked her out of that slump, clean her up, cloth her with the finest and most expensive clothes. She is then adorned with gold, and a crown was placed on her head. He marries her and she becomes the queen. This one whom the world thought will never amount to anything is now in the company of nobles, are fellowship is with royalties.

Here is this young lady as she walks so graciously, right into the private chamber of the king, the secret place where only the king enters. All the nobles and ranks in the land do not know this secret place neither have they entered it. Here is one, born a noble, his grandparents were nobles, all through his family line, generations after generations are all nobles, he grew up around the palace, probably spent most of his life in the palace, yet he does not have access to this private chamber, neither does he know it.

Instead a young lady whose family has never gotten anywhere near the palace, a woman of the slump, with no noble blood, with nothing at all, yet she walks in and out of the private chamber. She sits on a throne by the side of the king's throne, she share a bed with the king along with all that he has. All that is under the king's authority is now under her authority. Indeed, she has transcend, all because of one union.

Look at us, men that are born not too long ago, yet we have access to mysteries that angels have not yet touched despite the fact that they have been existing long long before us. We would teach angels, we would judge angels and show them wisdom, the very wisdom hidden in God. We are seated on a throne by the right hand of God's throne, we have become one with Him, sharing all that he has. Even His glory that he would not share with anyone He now shares with us. We have been brought into the inner chamber, into places that angels does not have access to.

Our company is no longer with created things (we are not in their class anymore), our fellowship is now with the Godhead. Our class and status is with the members of Godhead, we have been admitted into the company of the Elite of the elites— yes, the most elite group in all of eternity. Anything other than the members of the Godhead is beneath us, it is not of our class. We have high taste now, for we only taste of things within our class, the things of God Himself. God exists in Himself, by Himself, He is all sufficient. He is the realm that He exists, and in this realm He is everything; He is the land, the air, the life, the light, the water, the sound, the word, the communication, the food, the sustainer, the power, energy and all. He is all that He needs.