From Church Back To Ecclesia (part 2); In Practice 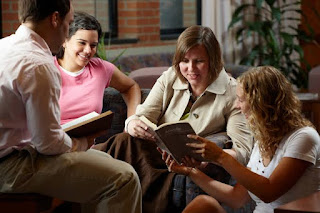 The Greek word for Church is Kuriakos, just as the Greek word for ecclesia is ekklesia. At some point in the History of Christianity there was a change from the practice of ekklesia to the practice of Kuriakos. This change began long before English language existed. This was back in the 4th century, English language first appeared around the 8th Century. So this is not a matter of English language, it is a matter of doctrine and Christian practice. The change of the English word from ecclesia to church only reflects the change that had started centuries ago when Christians stopped practicing ecclesia and started doing church.

What I am trying to say is that doing church is different from doing ecclesia. Church is a house of worship where people go to carry our certain religious rituals. While ecclesia is an assembly, something like a community meeting, or a family meeting where the members meet to fellowship together, bond, discuss issues concerning their welfare, and make important decision. You can see the difference, they are two completely different things. Practicing church is not the same as practicing ecclesia. Jesus asked us to do ecclesia, he never mentioned church. Church however, is a practice that developed out of the tradition of man. It was man’s idea to do church, Jesus plan was to have ecclesia.

The reason I am stating this is because I have been sharing a lot about Jesus’ desire to have us attain the fullness and it would become very difficult to understand how to fulfil the Christianity that Jesus envisioned when we continue to assume that this plan of Jesus is meant to be fulfilled in the church. Let me tell you the truth, church cannot fulfil the Christianity that Jesus envisioned, it is not designed to. Church is designed to fulfil man’s idea of how to worship God and do his work. Jesus said, “I shall build my ekklesia” (Matt 16:18), he didn’t say, “I shall build my Kuriakos”. It was Greek they spoke those days. Jesus plan was to build his ecclesia, and design it in a way that it would fulfil all that he envisioned for us Christians. This ecclesia would be designed to do the work of the ministry, it would be designed in a way that flesh and sin cannot survive in it, it would be toxic to anything that has to do with the carnal man.

Only that which is utterly Christ that would be able to strive and prosper in an ecclesia. The ecclesia is designed to purge away every tendency of the flesh from the life of the Christian, it’s design to bring to death all that is of the flesh, and all that is ‘self’ and carnal.  The ecclesia is design to be a breeding ground for sons, a place and a mother that would raise spiritual giants who would go out to do the greater works that Jesus spoke of. Church however, is design to do religion and help man fulfil their sense of religious obligation. It simply cannot fulfil the Christianity that Jesus planned for us.

“That they all may be one;” (John 17:21), “… that ye might be filled with all the fullness of God.” (Eph 3:19). Every of Jesus’ prayer, every of his dream and plan for us can only be fulfilled by and in an ecclesia, not a church. Church can try as much as it can to fulfill these things but it can never attain real success because it is not designed to fulfil these things, ecclesia is the one design to fulfil it. The reason why we feel it is impossible for the whole body of Christ to become one, and it is impossible for us to grow into the whole measure of the fullness of Christ is because all we see around us is church. When we start having ecclesia then you will see how possible it is for us to become one and be filled with the fullness of Christ.

Church is design to have majority of the people sit passively and watch a small group of people perform on the altar. How are you going to grow that way? We have a long way to grow and this requires actively engaging Christ, vigorously exploring his riches, not sitting down to watch some people perform. So you see, ecclesia is the one that can bring us there. Sadly in Christianity the practice of ecclesia has gone extinct centuries ago. But now God is raising people to rebuild ecclesia. The issue is that it is extremely difficult, if not impossible, to rebuild something that has gone into extinct like 1,500 years ago. It is like trying to genetically design a dinosaur, it would take nothing but a miracle.

It was 2013 God showed me a vision of ecclesia, it was an open vision. I was in a cab, looking from the wheel screen, and like a live video playing before my eyes I saw these people fellowshipping together. It wasn’t church they were doing, it was something different. I had never seen anything like it, I didn’t know what it was. I was looking at it and wondering, “What is this?” I had no idea what it was, it was alien to me as it is alien to most Christian today. It took me years sitting at His feet, learning little by little what ecclesia is, how it is God’s original plan before man’s tradition took over, and how an ecclesia can spring into life.

The reason why ecclesia is so difficult to produce is because it has life. Just like dinosaur, it is easy to make something that look like it, have the same structure and outward characteristic yet it is not alive. Yes there are many plastic, wooden, and metal dinosaur out there, but there is no living one. Therefore, we can easily build something that look like an ecclesia, the difficult and almost impossible thing to do is build an ecclesia that is alive. It must be alive, God does not deal with dead things, dead things cannot carry His glory. Only that which is alive (Christ is the life), only that which is Christ can fulfil God’s will.

So here I am, learning and experimenting like a scientist trying to genetically design a real life, living dinosaur. I have learnt a lot so far, and I am writing the book “The Fellowship Of The Mystery” to demonstrate in theory how to genetically build a dinosaur (I mean an ecclesia). But having the theory right is just one step toward actually building it. I know there are other people out there who God is calling to help rebuild the ecclesia, I have meant some of these people. And I hope my book of the theory would help in the quest to rebuild the long extinct ecclesia. I desire not just to have it in theory but to have the real thing and see Christians grow in all the fullness of God, and then gradually the whole body of Christ becomes one.

I know some day it would happen, I would see a real life, living ecclesia. As I continue to experiment and fail, I would get it right. It’s just that it is quite difficult experimenting when most Christians cannot see or appreciate what you are doing, as such there is very little support. I mean, to venture into something as impossible as this with little or no support, it makes it even more impossible (by support I mean people who understands and believe in what you are doing and want to see you accomplish it). Even scientist needs some kind of organization or institution to support and sponsor their work. Anyway, what the Lord has started He would complete.