The Justice In His Mercy 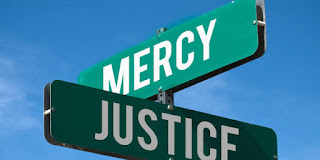 The mercy of God is something that had been greatly misunderstood, we think God's mercy is like that of man and that has cause confusion among the children of God. When I was younger I had this teacher who would always say "justice must be served", he was nicknamed "Injustice". But sometimes he says "I would temper justice with mercy", I was very young then but I learnt something from that. I learnt that when justice is fully served mercy is withheld and when mercy abound justice is withheld. The two cannot be applied together, you cannot ensure complete justice and yet still give mercy in it fullness. It is either you serve justice or give mercy, you have to choose from the two.

But God is so wise that He knows how to 'eat His cake and have it'. In Christ justice is mercy, they have been united as one by God's wisdom. God is a just and righteous God therefore He cannot withhold justice. The moment He withhold justice He has become unholy and unrighteous, therefore He must always serve justice righteously. But God is also love and He wants to have mercy, the problem is how can He have mercy and ensure complete justice at the same time. In His wisdom God sent His Son as the subject of justice.

God was pleased while punishing His Son because He was executing justice, He is a just and righteous God, yes justice must be served. But God executed on Jesus the justice that was meant for the whole world and as a result He can now have mercy on the world. Most people believe that when God has mercy on them He ignores their sin, that is not true because every sin must be punished and God would be unjust if He didn't punish a sin. What God does is that He takes the sin and place it on Jesus then serve justice by punishing Jesus for the sin, that being done He can now have mercy on us. Therefore He served justice and gave mercy at the same time, He punished our sin but yet had mercy.

God didn't just ignore the sin with anger in is face waiting for when we would sin again but He fully satisfied Himself when He punished the sin in Jesus. This is why the Bible says "Yet it pleased the Lord to bruise Him", yes justice have been satisfied therefore mercy has become our right. I have seen Christians begging for mercy as if they are going to die but mercy is yours already because justice had been served. God cannot punish a sin twice, that would make Him unjust. He has already punish your sin in Jesus therefore He has no right to punish you again, God would not defy Himself with such an unholy act. Mercy is your right because justice had been served.

You don't beg God for justice, He would surely ensure justice because He is just and righteous. So also you don't have to beg God for mercy because He has already severed justice therefore He has to have mercy. And you don't need to be afraid that God would come back to punish your sin because He has already punished it in Jesus. When God have mercy on us it is justice because it would be unjust to refuse to have mercy on us when He had punished the sin in Jesus. Therefore, the mercy is the justice, justice and mercy are one in Christ, for he is all in all, all things have been summed up in him.
Posted by David Emechete at 19:23