The Lamb In The Midst Of The Throne 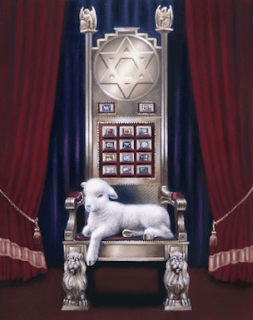 "And I looked, and behold, in the midst of the throne and of the four living creatures, and in the midst of the elders, stood a Lamb as though it had been slain, having seven horns and seven eyes, which are the seven Spirits of God sent out into all the earth." (Rev 5:6).

In the world the lamb can never get to the throne. One with the nature of a lamb can never be found near the throne, he just doesn't have what it take. In the world system, the people who are mostly found in government are those who are very ambitious, very authoritative, bossy, dominant, competitive, vociferous and crafty. But a gentile, meek and lowly nature is not the type that makes it in politics. In fact, in looking for a leader someone with the nature of a sheep is not qualified. It is the lion, the arrogant and egoistic that wins the throne.

Yet in Christ we find a different law, a different principle where the lamb is found in the midst of the throne. This just defies the logic of man, no a lamb is not competitive enough to be found in the midst of the throne. Look at the world, the competition in this world, is it possible that the lamb defeats all the craftiness and strength of all those devious competitors and end up winning the throne. In Christ, it is those that do not join in the struggle, in the competition that end up winning the throne. It is those that have no power in themselves that actually win the throne.

The wisdom of the world says, ‘believe in yourself, you can do it’, while the wisdom in Christ says, ‘Be poor in spirit, be empty, find no sufficiency in yourself. Come to the end of yourself; come to that place where you cry I CANNOT! So now I die that Christ might live in my stead’. Yes, the lamp is utterly lowly, empty and meek, he has no exalted ‘self’ lurking anywhere in his heart, and he doesn’t need that to attain the throne. The Israelite were expecting a Messiah, a king that would rule them, they didn't expected a man on the street that is so meek and as no military background. But yet that man who never swung a sword won the greatest victory in all of creation and became the king of all.

Go to leadership training and they would teach you all kind of traits that a leader should have but they won't teach you to be weak, submissive, meek, and lowly. But in Christ these are the true traits of a leader—weakness and lowliness. The truth is that we need to be re-socialized into the new creation, for we have carry a lot from the old creation, from the world and we have brought it into our lives as Christians. We need to become more familiar to the laws that governed the Land (Christ) so that we would be able to live and enjoy the fullness of the Land.