Life And Death (4); The Two Realms 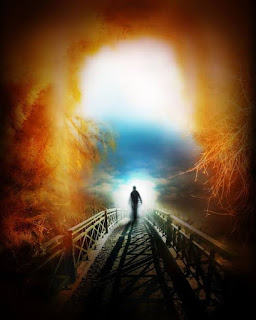 Death simply means the absent of life, it is that which is void of life, which life has been taken away from it or separated itself from life. God is life, he is the source of life and the sustainer of life. Outside Him there is no life, there is only but death. Anything that separate itself from God has separated itself from life and has entered into death—this is what happened to the devil. He separated himself from God and he died along with the angels that went with him. They all died, they entered into death, a realm as dark as the grave—no wonder it is called the kingdom of darkness.

The kingdom of darkness is located in the realm of death because it is only death that is filled with darkness. Death is a reality shut out from the reality of life and light; life exists, flourishes and is sustain by light, we can see that in the relationship between plant and the sunlight. So death has to be shut out of light in order to preserve itself and prevent life from growing in it. There, death isolates itself into darkness, trapping its entire inhabitant in the darkness of the grave.

Satan had already established a kingdom in the realm of death, there he reigns supreme. And when he saw man, God priciest creation, he decided he would bring man into death and make him a subject of the kingdom he has established in death. Well, you know the rest of the story, but there is something I want to point out. The kingdom of the devil is a kingdom established inside death, it can only operate in death. It operates only on that which has been touches by death, or which is inside death. This means the measure of death in a person is proportional to the measure that this person *CAN BE* subjected to the power of the devil—because the power of the devil only operates on death, it can only work on death.

Notice I said, “can be”, because you can still use the authority of Jesus to fight off the devil. But you know how the devil is, he would only come back with re-enforcement as long as the place is still habitable—it is only death that is habitable for the devil.  To remove every possibility of the devil ever having some kind of power over you it is best you have no death in you. Sin can be forgiven, and indeed it has been totally forgiven through Jesus’ once-and-for-all sacrifice. But the only solution to death is life; by his blood our sins are forgiven and by his life death is vanquish.

“For I know the thoughts that I think toward you, saith the LORD, thoughts of peace, and not of evil, to give you an expected end.” (Jer 29:11).

He has good plans for us, but we must come under His domain where this plans can freely be expressed without any interruption. In the realm of death His plans can still be interrupted and frustrated because of the activities of the devil there. But in the realm of life there is no such interruption; His will and plans are perfectly manifested exactly the way He wants. To come into God’s perfect will and enjoy the fullness of His promises we must grow into the life. The more you grow into life the more of God’s will is manifested in your life; the realm of the life is the reign of God’s will.

The trick of the devil is to bring you into death, to bring you where he can have enough authority to disrupt God’s plan for your life. He has no power until you come into death, so he has to find a way of luring you into death. That's the same thing he did with Adam, it is the same thing he has always done—first get the person into death where he has the authority and power to do whatever he pleases with the person's life. This is why we must learn to abide in life (Christ) and growing into its fullness.