Life And Death (6); The Reign Of Death 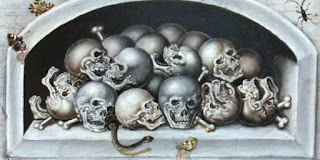 Death is a steady and continuous process of degradation, decay and disintegration. When something is dead it just continue to reduce and degrade, it cannot help itself for it is now programmed to destroy by itself and of its own self. Yes, it does not need any outside help, it is self-destructing. Everything it does is only to destroy itself, it is now programmed to do nothing else but destroy itself. No matter how hard it tries, it just cannot do anything but destroy itself. Whatever positive progress it might perceive from its many activities is nothing but an illusion, there is no progress in death only self-destruction. When death reigns it only has one rule—self-destruction.

“It is true that through the sin of one man death began to rule because of that one man.” (Rom 5:17).

Since Adam’s sinned death began to rule man’s world, this means that everything that man does is govern by one law—the law of self-destruction. He just cannot do anything that wouldn’t result to self-destruction. Like a ball rolling down a steep slope man cannot take any other direction but down the end of self-destruction. No matter how good intentioned he may be, no matter how brilliant his ideas or plans may be, it cannot lead to any other thing but self-destruction. When he sets out to solve a problem whatever solution he comes up with would eventually produce more problems either immediately or at the long run, hereby contributing to the myriad of problems that would eventually lead to self-destruction. Pushing the emergence of the problem further into the future is the best that man can do in his quest of finding solutions. The fact is that more problems even worse than the formal will inevitably emerge.

Death is that thing in man giving him habits, desires and longing for things that would contribute and lead to self-destruction. It causes man to crave for that which would destroy him. It makes it difficult for him to let go of things that are already destroying him. Yes, it causes man to design and construct his own destruction. We are not blind, we can see it, we can see ourselves heading down the path of self-destruction but we cannot stop it, for death is ruling over man and man cannot resist its reign. Death is not just ruling man, it is ruling everything created under man. Man was created to have dominion over all the natural things but since he gave his throne to death, everything natural is now under the reign of death.

As such everything is dying, the earth is dying, everything in this world is dying. Scientist can see this, but they can do nothing about it because whatever brilliant solution they come up with would only contribute to the inevitable destruction of the earth. Even the things they want to use to solve the problem is dying, so using it is like introducing more death to that which is already dying. No matter how they try to put things together it cannot result to life, it only descends down the path of death and destruction. There is just no way out of death, its grip is strong and it draws one deeper and deeper into the darkness of the grave.

In science, the second law of thermodynamic state that entropy (disorder and disaggregation) will always increase and no matter the change occurring it cannot stop this entropy. This steady degradation, can only be stopped when something outside this body of death is introduced. Yes, something from outside death, but the whole universe lies in death. Who is strong enough or powerful enough to conquer death and move beyond its boundaries, beyond this spectrum and reach out to apprehend life? No man is equipped to do that, no science has sufficient knowledge to accomplish that, so here is man in his utter helpless, roaming this realm of death with no way out or no real solution. Let’s go into man’s society and see how ugly death has made it be.

“For I do not do the good I want to do, but the evil I do not want to do is what I keep on doing… For there is another power [Death] within me that is at war with my mind [will]. This power makes me a slave to sin that is within me.” (Rom 7:23).

Whenever man is presented with good and evil, Death is that thing inside of him pulling him to go for evil, and as a result the tendency of doing evil increases. There is a higher tendency for man to choice evil over good, and evil comes in infinite shades. It might appear in fine colours that might even make it seem noble, something easily justifiable. Evil might appear as good and man quickly go for it thinking they have won death and defy his reign, but it is all an illusion. So man ends up doing more evil than good in his society. Yes, there are very good intentioned people in the society, but death knows how to use their good intentions to produce more death leading further into self-destruction.

Every invention made can either be used for good or evil, but with the increased tendency of choosing evil over good we find out that these wonderful inventions made with very good intention are now doing more evil than good in the society. People come up with brilliant ideas to solve the problems in the society only to find out that this solutions has unforeseen consequences, terrible consequences. Drugs meant to solve the problem of sicknesses ends up having side effected, some of these side effects are long term and even deadly. There is nothing man can do, death is everywhere, bringing everything to death.

No matter how positively you set out of your home with a smile on your face you will meet so much negativity out there that you cannot help being seduced into it. Hate, frustration, anxiety, anger, depression, they are everywhere and they are just so infectious. They come rushing upon you, trying to gain a space in your heart, to bring your heart to captivity. Yes, death everywhere, bringing everything to death.

One person experience an injustice and becomes overly suspicious in order to protect himself, then his suspiciousness leads to the suffering of another who would then build a fence around his/her heart—this fence result in hurting another who would in turn pass down this hurt, and suffering and pain, this continues to spread bringing everything to darkness, ugliness and death. There is no other path to go than destruction. Least I forget the spiritual world in relation to death. Death is the inability to express yourself in your own body, you cannot express your own will, so the devil and all the powers of hell sees an easy prey, something that can easily be manipulated and use for sport. These spirit beings have been in death much longer than man, and man has a weaken awareness to realm of the spirit, so he is left vulnerable.

There, in death we have man, blind and helpless with all these spirit being who sees him as nothing but an object to be bullied, a toy for their amusement. Throughout the history of man we find him being pushed about, toyed with by the big guys in the realm of death. As long as he is in the realm of death he is in their hands, and they can do however they please with him, but if he could just step out of death then he has gone beyond their reach and they are utterly helpless. Yes, Jesus saw that what man really need is to step out of death. The only real solution to any of man's problems is the introduction of life, no it is not more technology, or more knowledge, more businesses or money, better government, social reforms or whatever other solution we assume that man needs.

This is why I get shocked when people say they are called by God to do business, or politics, or feminism or some other social reform or technological advancement, and that God intends to solve the human problem through these things. How could God ignore what would truly help man and then begin to employ an inferior means? Jesus, the omniscience God, walked the earth at a time when man was very ignorant of the universe and had no real technological advancement to assist their everyday life. He didn’t teach man science and the secret of the universe, he didn’t invent any technology to assist man, he didn’t reform the political or social world. Rather he was focused on one thing, the only real solution to any of man’s problem—“I come that they might have life and they might have it abundantly” (John 10:10).

Yes, that is what man need, to have life, to have more and more life till he is totally free from the grip of death. Jesus is the same yesterday today and forever more (Heb 13:8), he has not change, and he is still focused on that one thing—to get life into man. If he is doing anything in this age then this is what he is doing, this one mission is what he seeks to accomplish through his body. Everything he is doing is to this end, to get life into man, and to get man so filled with life that he completely steps out of the reign of death.