Being The Embodiment Of The Kingdom Of Heaven 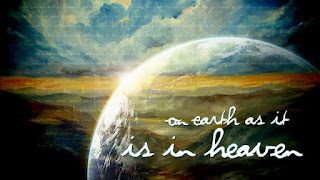 I have written several posts on this line. One is titled The House Of God, and it is on my Facebook page. Another is titled The Reign Of The Life, the last post of a series I just concluded. In those posts I tried to prove how we are meant to be the manifestation of heaven on earth as the body of Christ. When Jesus established the New Covenant God became one with man, and heaven became one with earth. It is a marriage between heaven and earth, God and man in Christ Jesus. Right now, this reality only exist in Christ and his body. But after the second coming of Jesus this reality would exit all over the universe. When that time comes, the only men that would be in existence are those who are in union with God, and the only earth that would be in existence is that which is completely married to heaven. But right now we have this reality existing only in Christ and his body, not the universe. If you still don't understand you can read the post on the Reign Of The Life, it's on my Facebook page—Centrality and Supremacy of Christ—just search for it on Facebook and you will find it.

Here in this post I would not try to establish what has already been established in a previous post. I only want to demonstrate the possibility of this reality. A few hours ago I was watching a video by Jeff Randell. He was telling how he entered a church meeting and that became really boring, so he told his wife he was going to lit up the whole church with God's presence. And his wife was like, "Please don't", but he did anyway, he just released the presence of God from within him at his seat somewhere at the back of the church. It came out of him so powerfully, the person in front of him fall down, the whole room became so filled with God's presence and everybody could feel it. The preacher began jumping and saying, "Yes, the Holy Ghost just entered into the room". Jeff Randell and his wife laughed. After a while everything resided and got really boring and lifeless again. Then Randell said, "I am going to lit up the room again", so he did it again the second time. Nobody knew it was him, but they could all feel the presence of God come so mightily. The preacher started jumping and saying, "Yes, the Holy Ghost has come into the room again".

Jeff Randell did it one more time, and they almost caught him, but they didn't have enough knowledge to understand that a single believer can just release God's presence from within him, so they never suspect that that's what he was doing seated at the back. As believers, in this flesh of ours lies the marriage between heaven and earth, and we can release the atmosphere of heaven into our environment. We can release that atmosphere of power, love, healing, holiness etc. I have heard of someone releasing the atmosphere of God's love, so that the people present became overwhelmed by this feeling of God's love that they began to cry. I have heard of several people releasing the atmosphere of holiness and the fear of the Lord into the environment, bringing everybody to conviction. Charles G. Finney is said to walk into a bar and just seat down quietly, and before you know it everyone in the bar becomes overwhelmed with the fear of the Lord and are brought to conviction. I heard of a sceptic who came to John Wesley to present some argument, but the moment he got close to Wesley he fell down with terror, overwhelmed with the fear of the Lord and was convicted.

Aliss Cresswell has a café and people have reported seeing clouds, angels and received healing in that café. She was not doing ministry, just living a supernatural secular life. That is how every Christian life suppose to be, we should be releasing heaven wherever we are. Let people come close to us and see clouds and angels, let them have an encounter with God simply by passing near us or near where we work. Let the tailor sew clothes and anyone that put on that cloth begins to have encounters. Let the hair dresser dress hair and have the customers come back to testify of visions and encounters as a result of that hair. Let people just love to come to our workshop because whenever they come they feel peace and joy, and they become so light as if all the weight of the issues of life is taken off their shoulders. Let people see angels, clouds and light around us. Yes, let's manifest heaven on earth and be a testimony of the union between heaven and earth in Christ.
Posted by David Emechete at 21:46