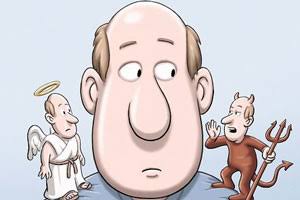 In the Christian we find that there are two men, embodying the two divides and the battle between life and death. When we got born again life was born in us embodied by the new man—Christ in us. But still there is the old man, embodying the carnal nature, that nature of death.

“That ye put off concerning the former conversation the old man, which is corrupt according to the deceitful lusts; And be renewed in the spirit of your mind; And that ye put on the new man, which after God is created in righteousness and true holiness.” (Eph 4:22-24).

These verses were written to believers not unbelievers, and there it mentioned the presence of two men in the believer. There is the old man and the new man, and the scripture reveal that we must forsake the old man and put on the new man. The scripture went on to give a lot of description about this old man—this man of dead works, always wanting to express death in everything. We set out to do normal human everyday things, and here comes the old man, trying to express death through those things we are doing. Then these things that were not bad in themselves, totally innocent, normal things turns into something perverse, producing hurt, pain, suffering, heartbreak and every other fruit of death.

You know that insatiable hunger, that thing in you asking for more and more, till you are pushed into doing something bad—that’s death. It all starts as an innocent desire, a wanting, or maybe a need—yes, something that we all need, like food or money. You set out to get this thing, but as you do here comes the carnal man with his desire to express death in this innocent desire or need of yours. And if you do not notice and absent mindedly give in, you will become filled with an insatiable hunger, you keep going for more, and wanting more, never reaching satisfaction. The inability to reach satisfaction soon brings you to the point of recklessness, which would then lead you to start acting stupid and perverse about this thing you are wanting, producing dead works, and leading to self-destruction.

Alright, here you are, you come up with a plan to do something good, important and even noble. But when it's time to actually do it you feel a sudden urge to 'quickly' attend to another thing probably unimportant. Yes, you tell yourself, "let me just quickly do this". 'Quickly' was the word you used, but then time began to fly by. You didn't realize yourself moving from that unimportant thing to another unimportant thing till time and energy is totally wasted and then you have to propose this important thing that you set out to do in the first place. "I can still do it another time", you say to yourself, but when the time comes again to do it a certain urge comes out of nowhere and you have to go do another less important.

Sometimes this less important thing might even appear more important, death would do anything to convince you that you must go on to do this thing. And here you go again, wasting time and energy, and now you find yourself in an endless circle of procrastination, until finally the desire to do this important and good thing is totally drained out of you. You are trapped in death, never moving forward or making any real progress, always being distracted, stuck in the habit of doing unnecessary and unimportant things. Things that would leave you wanting more and more, pushing you into recklessness, till you are brought to self-destruction.

Or maybe you conquered procrastination and finally set out to do this important and good thing. Oh, death always has another ambush waiting for us somewhere, man can never truly escape it. You figured out how to overcome procrastination and began to do this good and noble thing, with very good intentions and no interior motive whatsoever. But as you go about it you don't even realize when you got distracted and start doing something different from what you actually set out to do. Maybe it is a program to help people, you started it not for the sake of money or anything, you just really want to see people helped. But then as you continue it got the spotlight, a name and popularity, or maybe it didn't get any of that, but a lot of money started coming in.

You never planned for this, you never thought it would bring in so much money. It's all so exciting as all this money was coming, and yes you are excited, so excited that you didn't realized when you began falling in love with the money and shifting focus from helping people to getting more money out of people. At the end something that began in order to help people turns into another exploitation, causing more pain and suffering. Yes history is full of it, things starting with good intentions only to end up as a tool in the hands of death, bringing pain and suffering. I can go on and on describing the various ways the old man comes in and began to express death in the very good and noble things we set out to do.

The more you listen to the old man, the more he gets louder in you and gain more control over you. But the more you block him out—standing in faith and demanding that he stays dead—the more his voice grows silence, even as silent as the grave. As the old man is put to death we put on the new man whose sole purpose is to express life and cause it to spread, gushing out of us in rivers of living waters, bringing to life everything it touch, till the whole of our environment becomes filled with life and the reign of life prevails over the ugly reign of death.