Life And Death (11); The Essence Of The Battle 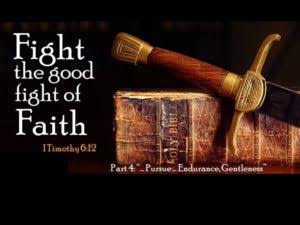 If you have been following this series you would be impressed by now about the battle between life and death, in this world and in us Christians. In the Old Testament we saw that the children of Israel had to fight for the Promised Land. Yes it was a land promised to them by God, they didn't asked for it, they were just on their own. In fact they were not even born when God promised them this land. And even though it was a promise from God—nothing from their part—they still had to fight for it. One would assume that since everything was God's idea then He should have taken care of everything Himself, but no they must fight to get it. God is a gentleman, He does not force things on people.

He is not one that would say, "Well, I think this is best for you, and whether you like it or not you must embrace it". No, God is not like that. He wants to give Israel the land flowing with milk and honey, but they must prove that they want it by fighting for it. And yes, God was not going to leave them all alone in the fight for this land, in fact he would send them a Joshua, a mighty man that would help them conquer the land. Take note that Joshua is the Hebrew word for Jesus, so you can see the connection. Now, let me show you a scripture of the Old Testament that reveals the reality we are experiencing here in the New Covenant.

"That is why the Lord left those nations in place. He did not quickly drive them out or allow Joshua to conquer them all. These are the nations that the Lord left in the land to test those Israelites who had not experienced the wars of Canaan. He did this to teach warfare to generations of Israelites who had no experience in battle." (Jdg 2:23-3:1&2).

Here is where the battle lies, we must fight the death in our soul and flesh in order to completely possess the land. This battle would test us if we truly desire the Lord and His Kingdom, and it would also teach us warfare. When the world ends, why should you be allowed into the Kingdom of God if you never fought for it when you were alive on earth? Why should you be given something you never truly cared about, and desire earnestly? Why should you be allowed to enjoy this Kingdom when you ignored it all your life, despite how the Spirit kept beckoning you to come fight for this precious land? No, it wasn't precious in your eyes, what was more precious to you was the world, you only opt for the Kingdom now because your precious world has been destroyed.

God would not give His kingdom to those who doesn't value it, those who only saw it has a Plan-B. He would only give it to those who were ready to sell everything to have it (Matt 13:44-46). Look at your life today, is the Kingdom a Plan-B to you, something in your second thought, some you do not consider first in everything in your life? To many of us that is what it is, we only think of the Kingdom when we have tried other things and it didn't work, then we remember that there is a Kingdom filled with the supernatural. We want to live this world and enjoy this world first before we remember that there is the Kingdom of heaven.

If we valued this supernatural Kingdom that Jesus died to give us then we would be fighting for it. We would be ready to lose everything to possess this land and enjoy it fullness right here on earth. Yes the supernatural should not be our second option, or something we consider only when we have tried every other thing and failed. The supernatural should always be our first option. We should be found always pressing in to experience the fullness of God in everything we do. Well, there is much to say concerning that but I must focus on the topic at hand.

So the battle is here to test us, to reveal our true intentions. It would expose those who accepted salvation as a Plan-B or a fail-safe plan in case this world, which they treasure more, is taken away from them. Yes, our God is wise, He has left the door of the Kingdom wide open, but at the same time He had also left a test to expose the true intentions of those coming in. Right there at the door into the Kingdom lies the soldiers of death, waiting to put up a battle against all that would seek to enter, and this battle is the test. Would you stand in faith and fight, or would you avoid the battle because you never truly value the Kingdom to that extent? This way the Kingdom is open to everyone, but only those who are worthy would have it.

"From the days of John the Baptist until now the kingdom of heaven has suffered violence, and the violent take it by force." (Matt 11:12).

So our Joshua (Joshua means savior) left some part unconquered in order to test our loyalty to the Kingdom. Those who are not loyal to the Kingdom would easily give up, they would see the soldiers of death and exclaim, “They are as giants and we are as grasshoppers before them.” (Num 13:32-33). These ones would never enter the land and enjoy the Kingdom. But those who keep fighting and fighting until their last breath, those who would not give up or be intimidated, those who are ready to give up their civilian life and all the comfort that comes with it, those who will sell their selves completely into battle, denying themselves of the enjoyment of the civilian life, these are the ones the Lord is looking for, this is the loyalty that He would reward with the Kingdom. Yes, the Kingdom is a reward, read the book of revelation carefully, it's a new testament book.

The Kingdom is a reward for loyalty; a kind of loyalty that would not allow you give up even if you are being defeated over and over again; a loyalty that would keep you fighting till your last breath even if you die without attaining that glory. It is not really about attaining, it is about fighting, and hoping, and believing, never stop believing no matter how much you are being intimidated not to believe anymore.

The Lord wants to meet you fighting, and let death meet you still fighting, and then the Lord would reward you with the Kingdom. Yes, he is coming to reward us not for our victory but for our loyalty, for he has already won the victory, and all that he ask of you is the you remain loyal to that victory, never accepting defeat. And by loyalty I mean faith, yes faith is standing loyal, believing in his victory no matter what, for if you believe in his victory you will never accept defeat. So in essence, the Lord is coming to reward faith, the whole journey started with faith and ends with faith, we must be found still standing in faith.

“For we wrestle not against flesh and blood, but against principalities, against powers, against the rulers of the darkness of this world, against spiritual wickedness in high places. :Wherefore take unto you the whole armour of God, that ye may be able to withstand in the evil day, AND HAVING DONE ALL, TO STAND.” (Eph 6:12).