He Who Sits In Heaven Laughs 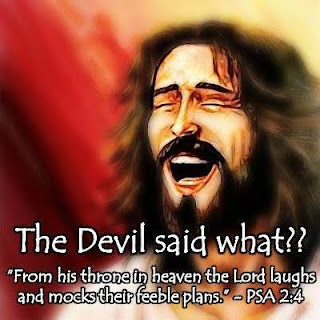 "Why are the nations so angry? Why do they waste their time with futile plans? The kings of the earth prepare for battle; the rulers plot together against the Lord and against his anointed one... But he who sits in the heavens laughs; the Lord ridicules and mocks them." (Psalm 2:1,2,4).

You might look at the scripture above and say, "Well, that's talking about God and Christ". I would need to quote more scriptures so that you can understand your place in all this.

"For he raised us from the dead along with Christ and seated us with him in the heavenly realms because we are united with Christ Jesus." (Eph 2:6).

"that raised Christ from the dead and seated him in the place of honor at God’s right hand in the heavenly realms. 21 Now he is far above any ruler or authority or power or leader or anything else—not only in this world but also in the world to come. 22 God has put all things under the authority of Christ," (Eph 1:20-22).

You are one with Christ, completely united with him, and this Christ is seated far above every power and authority. In that place where he is seated you are inside him in oneness, hence you are also seated above every power and authority. So as the enemies plot and put up all their efforts against you, who is in Christ, you just laugh because you are seated above them. Yes, it say he who is seated in heaven laughs and mocks at the evil ones, that is referring to you.

You are seated in heaven, you are seated above every power, authority and anything else. So when the evil ones begin to plot against you and go about in their busy-body, trying to harm or destroy you, what do you do? You laugh at them, you mock them. Oh, if only we understand the power we have in Christ. All the powers of hell combined together cannot leave a crash on you. It's just nonsense, all of their efforts is just a waste of time. You look at them and you just laugh.

No, you do not begin to run about in panic, going from one church to another, from one prophet or pastor to another. If you know where you are seated, if you are awakened to that reality, you will only laugh. Who are witches and demons? They are nothing, complete nothing. They are but filthy rages to be kicked about. They have no power compared to the authority you wield.

Well, if the evil powers are exercising some kind of influence in your life, it isn't because you lack power, but because you are far away from the position that God has placed you, you are yet to be awakened to it, to become one with it. He placed you in heaven, on a throne above all things. Rather than becoming one with this reality you are busy fighting with the evil ones.

An eagle knows that his greatest advantage is the sky. He doesn't fight a snake on the land, rather he takes the battle to the sky. Your greatest advantage is sitting on the throne, it is foolish of you to remain beneath the throne fighting witches and evil powers. In fact, when you ascend the throne there is no need to fight anymore, you just laugh. If only you understand this you will focus more on coming into oneness with the reality in Christ rather than fighting your enemies.

Take the battle to the sky, spread out your wings and try to lift up in flight. Don't be too overwhelmed with the battle that you forget to fly. Fix your focus on flying and just take flight. Come alive into the reality where God has placed you.