The Two Kinds Of Prophet Of The New Testament 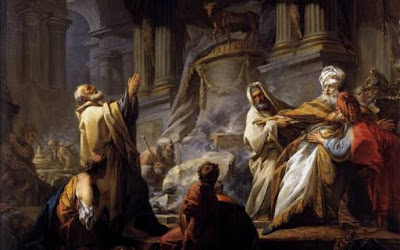 I wrote a series on the prophetic and shared it on my blog. If you haven't read it please do. This current post is expounding on the last post in that series titled "The Ministry Of The Prophet". From that series you will understand that we are all prophets as members of the body of the Prophet (Christ). This Christ exists in unsearchable riches, diverse dimension, different members of the same body. Each member are unique in their expression of Christ the Prophet, and that is how it is meant. We are all supposed to operate in the prophetic in diverse and unique ways.

"Now these are the gifts Christ gave to the church: the apostles, the prophets, the evangelists, and the pastors and teachers. Their responsibility is to equip Gods people to do his work and build up the church, the body of Christ. This will continue until we all come to such unity in our faith and knowledge of Gods Son that we will be mature in the Lord, measuring up to the full and complete standard of Christians" (Ephesians 4:11-13).

We are all prophets, but then Jesus gave a gift to his body, and this gift is called prophet. Now, the purpose of this gift is to equip the Church and build them up into maturity of who they are as the body of the Prophet. This means this gift is meant to teach Christians and built them up to be able to operate in the prophetic to the fullest (maturity). If you've noticed, I have just mentioned two kinds of prophet.

1. The Teaching Prophet
2. The Functioning Prophet

We are all meant to be functioning prophets in our spheres of life. Jesus desire a functioning body where all members are functionally alive. So we should all be functioning, actively alive, actively expressing our Lord who is the Prophet. Now, to ensure that His body is properly functioning Jesus has set in the body another kind of prophet, one which I would like to call the teaching prophet. Yes, it's a teaching prophet because the purpose is not just to prophesy (function), but to train, build up and  equip other members of the body to become functional in the prophetic.

The gift or ministry that Ephesians 4:11 mentioned is not the gift or ministry of prophesying, but the ability to be able to teach others and equip them to function in the prophetic. The reason why many Christians are not functioning in the prophetic today is because those that God has called to equip the saints to function in the prophetic did not grow into the fullness of that gift. Rather they stop in the stage of just prophesying to the people of God. Once they get to this stage they feel they have fulfilled their ministry and then they stop growing.

They get carried away in doing "ministry", and then they begin to suffer from stunted growth as a result of burnout in ministry. Burnout, because it was never meant to be that way. The Church was never meant to have few prophets, ministering to a large number of people. Rather it should be everyone moving in the prophetic in their various sphere of life. It sad because many ministers do not grow into the fullness of their ministry before they die.

Kenneth E. Hagin said after twelve years of ministry, Jesus told him that he had just entered the first stage of his ministry. He was so shocked, and was like, "what then have I been doing for the past 12 years". Then Jesus answered, "You are lucky, many ministers die without even entering the first stage". To the eyes of the public, these ministers would have been called very successful and they would have become role models—the peak that many are pursuing. Sadly, this peak is not even the beginning stage, it is still largely kindergarten.

The body of Christ, for the last centuries, has been largely in the kindergarten. But now, the Lord is demanding for mature sons, and this would involve mature ministries where every Christian is being trained to operate in the fullness of God, measuring up to the full standard of Christ. Look at the standard of Christ when he walked the earth, he did all kinds of mind blowing miracles. But that standard increased when he resurrected, ascended, glorified and was seated at the right hand of power.