Christ Is Both The Fulfilling And The Abolishing Of The Law 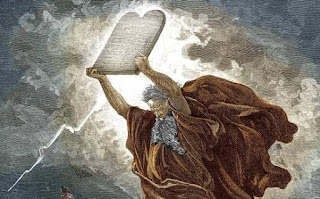 Abolish mean to end, put away, or set aside and stop the practice of something. While fulfilled means to carry on, obey, follow, or comply to some rule, regulations and requirements. You can see that the two words stand opposite to each other.

"The former regulation is set aside because it was weak and useless (for the law made nothing perfect), and a better hope is introduced, by which we draw near to God." (Heb 7:18-19).

"In speaking of a new covenant, he makes the first one obsolete. And what is becoming obsolete and growing old is ready to vanish away." (Heb 8:13).

To fulfill the Law means to continue practicing the law; while to abolish it mean to end and put aside the Law. Jesus said he didn't come to abolish the Law but to fulfill it. Yet, in the other scripture we see that he abolish the Law. This has been a major cause for confusion to many Christians. We have not be able to reconcile this truths, and as such we have taken different camps. Some of us have camped with "abolish" and have rejected "fulfill", while some camp with "fulfill", and struggle with "abolish". And there is another group that are partially camping in "fulfill", and partially camping in "abolish".

"So spacious is he, so roomy, that everything of God finds its proper place in him without crowding. Not only that, but all the broken and dislocated pieces of the universe—people and things, animals and atoms—get properly fixed and fit together in vibrant harmonies, all because of his death, his blood that poured down from the cross." (Col 1:19-20 MSG).

"He set it all out before us in Christ, a long-range plan in which everything would be brought together and summed up in him, everything in deepest heaven, everything on planet earth." (Eph 1:10 MSG).

We have this problem because we see abolish and fulfill as two contradicting things. But once you come into Christ, nothing is contradicting anymore, they are all one. All things had been summed up and harmonized in Christ. In Christ there is no longer contradictions and conflicts or division but all things had been made one. Abolishing is no longer contradicting to fulfilling, they are now one. No, we do not have two different camps, they are actually one camp. We don't need to be divided, or to struggle to decide where to camp, for everything has been harmonized and summed up into one.

In his birth, crucified, death and resurrection, Christ carried out all the requirements of the Law. If you study every aspect of the Law you will realize that they were all fulfilled in Jesus birth, his life on earth, his death and resurrection. Everything he was doing on earth was a fulfillment of not just the Law, but also the prophets, and the whole life and history of the nation of Israel. Now, everything Christ did he established them in himself as an everlasting reality. Hence, immediately you came into Christ you enter an everlasting reality that is the fulfillment of all the Law, the prophets and the whole history and life of Israel.

"Then He said to them, “These are the words which I spoke to you while I was still with you, that all things must be fulfilled which were written in the Law of Moses and the Prophets and the Psalms concerning Me.”" (Luke 24:44).

Therefore as you live in that reality called Christ, you are inside the fulfillment of the Law, hence you are fulfilling the Law. Living in this reality goes beyond just being born again, it involves walking and living by the life of Christ.

"I have been crucified with Christ. It is no longer I who live, but Christ who lives in me. And the life I now live in the flesh I live by faith in the Son of God, who loved me and gave himself for me." (Gal 2:20).

So in Christ we have already fulfilled all the Law, yet we are fulfilling the Law. It is a reality that is both finished and ongoing. It is finished because this reality has been completed and perfected. It is ongoing because you continue to exist in it. It is not something you finish and then close the book and walk away. Rather it is something you finish and then you enter into it and start living in it. What this means is that the moment you receive Christ you have received the fulfillment of the Law, hence you have fulfilled the Law—finished. But then you entered into that fulfillment of the Law and begin to live inside the fulfillment of the Law, hence you are fulfilling the Law—ongoing.

"I have received Christ—I have already fulfilled the Law. I am living in Christ—I am fulfilling the Law".

The fulfillment of the Law is no longer an act, it is now a person and each time you do this person you are doing the Law. I would pick one of the Law and demonstrate it to you. One aspect of the Law is carrying out sacrifice. If you want to fulfill this Law in the Old Testament, you will have to carry a lamb that has no deformity, take the lamb to the altar, slay this lamb, set it on fire, and watch as the smoke ascend unto God.

But if you want to fulfill this same Law in the New Covenant you will take (get a revelation of) the reality in Christ/the person of Christ (the perfect lamb), fix your eyes on the cross (place it on the altar), die to self (slay the lamb), rest on the Holy Spirit (set fire on the lamb), and then express the life of Christ in you (watch the smoke ascend to God). I hope you get it? Everything you would do while fulfilling the Law in the Old Testament has a counterpart when you are living by Christ, the fulfillment of the Law. Just as I picked "sacrifice" and demonstrated how you are fulfilling it in Christ, I can also pick any part of the Law—name it—and I will demonstrate how you are fulfilling it (unknowingly) as you go about doing Christ. 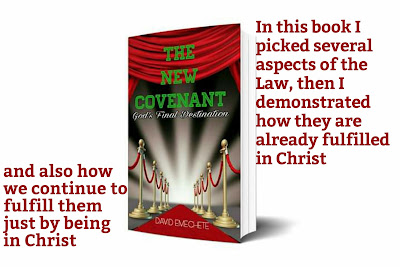 Each time you do Christ you are doing all the Sabbath, all the commandments, all the ceremonial cleansing, all the sacrifices, all the offerings and tithes, all the rules and regulations, all the Passover and the various other feast, all the fast, and etc. You are doing them all simply by doing Christ (allowing Christ live through you/living by the life of Christ). You may not know that you are fulfilling the Law, but you are.

"So why would you allow anyone to judge you because of what you eat or drink, or insist that you keep the feasts, observe new moon celebrations, or the Sabbath? All of these were but a prophetic shadow and the evidence of what would be fulfilled, and Christ is the reality." (Col 1:16-17).

Let me put it plain and simple; "the Law is abolish as a thing in itself, but the Law is still being fulfilled as a reality called Christ".

In the Old Testament, the Law was a thing that exists independent of Christ. Jesus hasn't come then to establish the reality in Christ, so the Law was a thing existing in itself. It was a list with details that you must literally follow precept by precept. But now, Christ has become the fulfillment of the Law for you, so you are not carrying the Law as a list and literally trying to obey it one by one or picking which to obey and which not to obey, rather you are just busy doing Christ. You are focusing on living by the life of Christ in you.

It is like someone that is ask to take certain prescription of some drugs. Then someone helped you to select everything just right (following the prescription very precisely),  and put all the drugs into a cup of water where it all dissolved, so that you can drink it. All the drugs that was prescribed for you are already together in that cup of water. It would be foolish of you to know this, yet take the list of the prescription again, and begin to collect all the drugs. Or you collect just some of them (maybe because you are not so sure the person put everything inside the cup, you don't trust the person), and then you drink it with that cup of water. That would be drug abuse, and it could cause serious damage to your health.

All that was prescribed in the Law has been carefully put together inside that reality called Christ—that Christ that you receive into your life. How many of us don't trust that Jesus did a good and perfect job? If none, then it would be utter foolishness to go back again to practice some aspects of the Law together with your being in Christ. It is ignorance that makes some of us go back to the Old Testament to pick which Law to follow. Some of us try to separate moral Law from the ceremonial Law, and then we tell ourselves that we must go back to the moral Law. Law is Law, and you are following it all by being in Christ and living by his life. If you are living by Christ, you will love your neighbors as yourself, and you will fulfill all the moral Law—it's just natural because that's the reality in Christ.

Just focus on Christ alone, for he is sufficient and he is all in all. Everything that the Law was to the children of Israel, Christ has become for us. He is our priest, our tithe, our prophet, our king, our shiloh ground, our Jerusalem, our sacrifice, our temple, and our all in all. Yes, focus on the faith in the Son of God, for that is the fulfillment of the Law. This Christ is both the fulfillment and the abolishment of the Law. In him the Law has been abolished (it is no longer practiced in itself) and in him the Law is being fulfilled everlasting.
Posted by David Emechete at 01:10