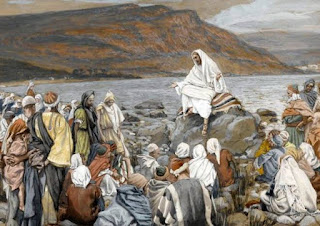 This post belongs to a series and the series flows together from the first to last. So I will advice you start from the first post of the series. The first people who taught in Christianity did so because they had sat with Jesus. They spent time with Jesus, they were caught up in the life of Jesus. As such people gathered around them to hear them talk about Jesus. No, they were not teaching scripture, they were teaching Christ. Therefore, a teacher is one who have been caught in Christ and have learned Christ, and is gifted with the ability to teach this Christ in a way that others would easily be able to understand.

When Jesus taught, he wasn't expounding scripture. You can search the books of the gospel very well. There was not a time Jesus began to expound of scripture. He came to teach about the Kingdom, and that was his focus. Yes, sometimes he might site the scripture, but in everything he says he is teaching about the Kingdom. Now, to understand how teaching works we must look closely at how Jesus taught about the kingdom. He uses parables and illustrations. He uses things around him, things that people can easily relate to. This way grasping what he is teaching would not be difficult.

He would pick a seed and say the kingdom of God is like a seed. He would point to a farmer and say the kingdom of God is like a farmer. He kept using symbols of things that people could relate with and understand. Teaching is not about quoting a lot of scripture. Please, you can go and search through Jesus' teachings and see how rarely he quoted scripture. It is not about quoting scriptures. Some people would just quote, and quote and quote so many scriptures, and they will give their interpretation of it and claim they are teachers. Teaching is not about interpreting Bible, it's about unveiling Christ. If you go down the path of interpreting Bible you will only end up projecting your worldview, doctrine and culture into the Scripture.

The Scripture was written in another culture, and in an epoch too long ago for us to understand or relate with. The context surrounding the Scripture is very alien to us today. So if your aim is to interpret Bible verses, and you ignore the cultural and social context, the epoch, and the events surrounding those verses, and you just try to interpret it like that, you will end up projecting your the 21st century culture, society, church system, doctrines, and your own worldview into those verses. You will give your own interpretation, someone else will come and give his own interpretation, contradicting yours. And then both of you will end up in some argument, trying to defend your individual worldviews masquerade as Bible teaching.

Even if you took the pain to research on the cultural context, the events surrounding the scripture, the life of the person God used to write it, and every other thing related to that Bible verse. There is still a probability that you might not interpret that verse correctly. The only person that can properly interpret that verse is the person who wrote it. You, trying to interpret it after thousands of years that it was written, will only end up in speculation. And someone else will come with his own speculation, then speculation will begin to compete with speculation, leading to an endless speculation. This was what the Scribes and Pharisees were experiencing. They were not sure of what they were teaching because they were just speculations and subjective interpretations.

They were shocked when they saw Jesus teaching. He wasn't speculating, he was dishing out the principles of the kingdom. How did he know these things, how was he so sure of himself? It's because he didn't get his knowledge from trying to interpret something that somebody wrote in the scripture. He got his knowledge from direct interaction with the Kingdom. He interacted with the very thing that Abraham, Moses, David, and the rest interacted with, as such he knew what they were trying to describe even beyond how they described it in the scripture. He knows for sure that 'this' is what Moses and David were trying to say because he has also seen and interact with that thing they wrote about.

"Now this is eternal life: that they know you, the only true God, and Jesus Christ, whom you have sent." (John 17:3).

Even if the authors were misinterpreted, what matters is that the kingdom is properly described. We are not called to interpret Scripture, we are called to know God. To Jesus, it was not about interpreting scripture, it's about teaching the Kingdom. Unlike the Scribes and Pharisees, Jesus wasn't occupied trying to interpret the scripture, he was busy teaching the Kingdom. And when necessary he would site the scripture to affirm that what he is saying is in line with what is written in the scripture. This was the same approach Paul took, look at the book of Hebrews very well. That book is focused on unveiling Christ. Yes, scriptures were sited, but still, the aim was not to interpret the scripture, but to unveil Christ. Please, go back and study the book of Hebrews and carefully observe the writing style—it was all about Christ, from start to finish.

So the teaching ministry is about teaching Christ, using familiar scriptures, symbols and things that people can relate with in demonstrating the reality in Christ. So a teacher is gifted with supernatural understanding and the ability to recognize patterns. One of the distinctive feature that made human intellect higher than that of other animals is the superior ability to recognize patterns. It is from this ability that we are able to understand nature and develop science. By recognizing patterns we are able to discover laws of nature and then decide how to use them for our advantage.

In Nigeria light (power) is not constant, so there was this time in my home when I was a kid. My younger brother said the light will come up now, and immediately the light came. I was surprise, how did he know the light will come up. So I asked, and he said the light always come up at this very time every Thursday. "Who told you that", I asked. He said he had been observing it for a while now. It was a pattern, every Thursday the light would comes up at that very time. He was observant so recognized the pattern and as such he was able to make an accurate prediction—that what science is all about.

As we interact with nature we recognize patterns, and with those patterns we discover principles and laws of nature. Christ is a reality, he is not just a person. We are in this reality called Christ, that is why all over the New Testament you will see the frequent use of the clause, "in Christ". We are inside this Christ which is a reality; "For in him we live and move and exist." (Acts 17:28). During salvation we were translated into another world, the new creation. This natural world is the old creation, God has created a whole new world in Christ.

"So the Jewish leaders began harassing Jesus for breaking the Sabbath rules. But Jesus answered them, My Father has worked [even] until now, [He has never ceased working; He is still working] and I, too, must be at [divine] work." (John 5:16-17).

"and to make all see what is the fellowship of the mystery, which from the beginning of the ages has been hidden in God who created all things through Jesus Christ;" (Eph 3:9).

"But we speak the wisdom of God in a mystery, [even] the hidden [wisdom], which God ordained before the world unto our glory:" (1Co 2:7).

"He indeed was foreordained before the foundation of the world, but was manifest in these last times for you" (1Pet 1:20).

So right now the new creation is here, but not completely here. The natural world was created as a shadow of the new creation. Therefore the same way we observe patterns in the natural world, and through those patterns we discover laws and develop science. That is how we are to observe this the new creation, recognize patterns, discover laws and principles, learn how to make spiritual technologies in order to manifest the glory of this new creation. The glory of the 21th century civilization is science. We have been able to understand nature and with this understanding we have invented and made all kinds of amazing things.

Look at how glorious our cities are, especially those very advanced nations. There are some cities that when you see them you are filled with awe. That is the glory of human civilization. But there is also the glory of the civilization of Zion, the heavenly Zion, and its glory surpasses that of the old creation. But this glory cannot be manifested until we have teachers who's focus are not to teach doctrines, concepts, stories and there morals. Teachers who are so awakened to the reality in Christ that they interact with this reality. And through that interaction they recognize patterns, discover laws and principles, and learn how to apply them in order to make our city glorious.