Civilization Of Zion (3); A Complex System 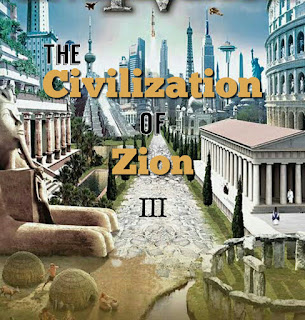 In the previous posts I wrote about the process of becoming a civilization, and how we must leave the rudimentary if we are to become a civilization. A civilization is an advanced society with a complex system. You cannot look at the anatomy of living things, especially human beings, and not be stricken with awe and be amazed at how wise God is. Only a super intelligent being, with a wisdom so transcendent can design such a complex system. Till today scientists are still struggling to grasp and unravel the complex system of the human body—it is a wisdom too great to grasp.

Yet, all that is not enough to demonstrate how great God's wisdom is. God still felt that he needed something that would properly unveil the immense riches of his wisdom.

"God’s purpose in all this was to use the church to display his wisdom in its rich variety to all the unseen rulers and authorities in the heavenly places." (Eph 3:10).

Then we have the apostles coming with the blueprint of this great civilization to lay down the foundations upon which the city will be built. Each apostle coming with an advanced work, more complexity to add to the previous ones, turning the city into that richly complex thing God desire. Yes, to fulfill God's eternal purpose; the plan to have a civilization so advance and complex that all the angels, heavenly spiritual authorities and supernaturally beings, gather together in amazement and awe of the greatness of the wisdom of God demonstrated in the complex design of the Ecclesia of God on earth.

Yes, we are the city of God, a advanced city, the greatest civilization in all of eternity. We may not look so right now but we would. A golden age is coming, God must demonstrate to the rulers in the heavenly and to every created being that his bride is the most wonderful and beautiful thing that has ever stepped into creation. He would do it in this age, for what better time to demonstrate glory than in the time of great adversities and battle?

What better place to demonstrate the beauty of light than in the midst of darkness?

What better time to demonstrate strength then in the midst of the fiercest of battle?

What better time to demonstrate the power of salt than in a tasteless generation?

What better time to demonstrate the greatness of love and holiness than in a the most sinful and perverse generation?

The Church would be so glorious that her glory will infuriate the powers of darkness to the extent that they will not be able to hide again. They will jump out of their hiding with their front man—the anti-christ. They will set out to annihilate the Christians who now hold the world in ransom, demonstrating a holiness so profoundly pure that it makes the tiniest sin look so terrible, a light so bright that those who hides in the darkness no longer have a place to hide, their shame is left completely exposed to the world.

"And this is the condemnation, that the light has come into the world, and men loved darkness rather than light, because their deeds were evil. For everyone practicing evil hates the light" (John 3:19-20).

Yes, her light has become their condemnation, her glory has become there shame, her beauty makes them feel so despicable and ugly, her holiness and righteousness makes them feel so guilty and terrible. They can no longer have her in their midst, so the anti-christ comes out of his hiding to exile this glorious bride, send her into the wilderness where are beauty and glory would be hidden away from the world.

"Now when the dragon saw that he had been cast to the earth, he persecuted the woman who gave birth to the male Child. But the woman was given two wings of a great eagle, that she might fly into the wilderness to her place, where she is nourished for a time and times and half a time, from the presence of the serpent." (Rev 12:13-14).

I don't want to go into eschatology. I am just revealing to you what the Lord has shown me. His Church would ascend into power and government. She will cast down the rulers in the heavenlies, she will displace the king of the world from his throne. She will demonstrate a glory so great that it will enrage the devil to the extent that he can no longer remain in hiding. He will finally come out physically to cease back control of the world. Do not think this world would end without the Church demonstrating the fullness of her glory. God has chosen this time to demonstrate the greatness of his glory in his bride.