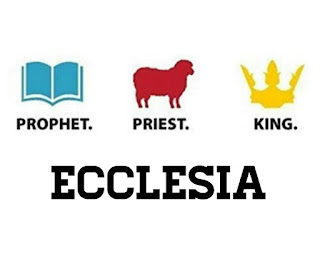 The Ecclesia is a government, a group of people gathering together to make governmental decisions. Jesus called us the ecclesia because he wants us to be the vessel through which the government of the Kingdom of heaven would be exerted and expressed on earth. The first time ecclesia appeared in the New Testament was;

"Now I say to you that you are Peter (which means ‘rock’), and upon this rock I will build my church [Ecclesia], and all the gates of hell will not conquer it. And I will give you the keys of the Kingdom of Heaven. Whatever you forbid on earth will be forbidden in heaven, and whatever you permit on earth will be permitted in heaven." (Matt 16:18-19).

Imagine such tremendous power. And the Ecclesia is organized in such a way that it exists by locality. That is, if the Ecclessia in Lagos contend and locked the gate of theft, stealing will cease in Lagos. The Ecclesia in Benin can contend and lock the gate of witchcraft in Benin, and the witches would just realize that their powers are no longer working, their connection to hell has been shut down. The Ecclessia in Abuja can contend and lock the gate of corruption, and people would just realize that the tendency towards corruption have ceased.

I am only listing out the possibilities. You can allow your imagination to run wild, and think of all the things we could do with such power. However, the most important question is how do we ascend to such power? To understand how the government of God works, we would look at the system that God established in the Old Testament in order to govern the people of Israel. This structure comprises of the priest, prophet and king. The role of these three parties are very crucial for the manifestation of God's government in Israel.

If any one of these parties didn't play their role properly it will cause God's government to decline. When I say the government of God in Israel, I am referring to things like victory in war, peace, prosperity, justice and righteousness. Whenever Israel suffer defeat, or there is corruption, upheaval, injustice, plague, and death toll, then it means these parties have not been properly playing their roles. So how does these roles result to God's government finding expression in Israel. Firstly, we must understand that God's government can only find manifestation where life is reigning.

"My covenant with Levites was to give life and peace. I kept my covenant with them, and they honored me. They stood in reverent awe before me. They taught the truth and did not lie. They walked with me in peace and uprightness. They not only did what was right themselves, but they also helped many others to stop doing evil." (Mal 2:5-6).

When you are carnal and sinful you are releasing death. But when you are righteous and submissive to God who is spirit, then life is being released. This is why the priest have to be righteous and teach the people to be righteous. By doing this they are releasing life into the land, causing the atmosphere to become conducive for the government of God. The role of the prophet is to declare God's mind, to make God's mind known in the land. While the king is the instrument by which God exercises His government. Like I said, each and every one of this role is important, especially the role of priest. Without them God's government cannot manifest on earth.

The heaven belongs to God and the earth is for mankind. Without these special roles of man, God cannot exercise His government on earth. Anyway, we have seen how all this plays out in the Old Testament, now let's go to the New Testament. In the New Testament every believer is meant to play all these roles. Each one of us are supposed to be priests, prophets and kings. So the Ecclesia is a gathering of priests, prophets and kings. The Ecclesia must play all these roles if they are to manifest the Government of God on earth. The very purpose of the existence of Ecclesia is to manifest God's government. If we are not doing this then we are not truly being an Ecclesia.

"I beseech you therefore, brethren, by the mercies of God, that you present your bodies a living sacrifice, holy, acceptable to God, which is your reasonable service." (Rom 12:2).

Our priestly service is presenting our bodies as living sacrifice and living a holy life. This would allow the ecclesia's locality to be filled with life. Yes, a people living righteously and influencing as many as they can with their righteous living. If the ecclesia could play this role then they will release life into the locality, making it conducive for the manifestation of God's government. Then the Ecclesia must also be prophetic, they must know God's mind and receive instructions from Him. They must be able to approach the prophetic realm corporately and join hands together to translate God's mind.

The Ecclesia must have access to the realm of the spirit and be alert enough to receive update. Intelligence is very important for government. This is why great government like the USA have intelligence agencies such as the CIA. Government cannot work without good intelligence, that is why we have the prophetic. And lastly they must learn to exercise God's authority on earth. This people must learn to wield authority, and command obedience. It is not an easy thing, not everyone can wield authority. But the Ecclessia must develop themselves to be able to wield authority.

They must be courageous, bold, assertive, full of God's confident and faith. They must be strategic enough to know how to ascend into spiritual power in their territory or locality. This is spiritual politics; the act of dethroning powers and outwiting spiritual territorial authorities. Look at the wisdom that God used to outwit the power of the devil as king of this world.

"No, the wisdom we speak of is the mystery of God... But the rulers of this world have not understood it; if they had, they would not have crucified our glorious Lord." (1Cor 2:7-8).

God used the devil hands to defeat him. He caused the devil to unknowingly contribute in defeating himself. Government require wisdom, it requires strategizing to outwit and dethrone powers. These are spiritual politics and the Ecclesia must be good at it. It is important we learn these things for this is our calling, to bring God's government in every place we find ourselves.

We were commanded to strive for this.
Posted by David Emechete at 05:12