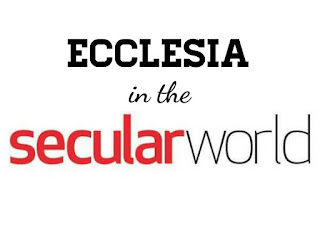 In previous posts I explained how the ecclesia is the government of God's kingdom, called to contend with gates of hell, wield the key of the kingdom of heaven and manifest heaven on earth. And they are to do this wherever they find themselves. The local ecclesia is responsible for exercising the government of God in that locality and manifesting the Kingdom of heaven.

"And God shall wipe away all tears from their eyes; and there shall be no more death, neither sorrow, nor crying, neither shall there be any more pain: for the former things are passed away." (Rev 21:4).
"For the kingdom of God is not a matter of eating and drinking, but of righteousness, peace and joy in the Holy Spirit," (Rom 14:17).

Under the government of God all tears are wiped away, pain and sorrow are removed, affliction and oppressed and stopped, and all that is left is love, joy, peace and righteousness. The local ecclesia is responsible for the manifestation of all these things in their locality. They are to wipe people tears, show love and care, heal pain, sorrow and sickness, fight for the oppressed, and bring down the atmosphere of heaven into that locality so that it can be filled with a great sense of righteousness, purity, and an overwhelming feeling of joy, peace, and love.

The same thing that the local ecclesia does in their locality is what the secular ecclesia should do in the secular world. Every spiritual person knows that there are certain demonic prince ruling each profession, corporation, industry and institution. The entertainment industry has its demonic prince with several gates of hell operating there. The fashion industry has there own demonic prince and gates of hell. Politics, the economy, education system and schools, they all have gates of hell operating there. It is a shame on us when these gates continue to strive when believers work and exist in these industries and institutions.

We are called to contend with the gates of hell wherever we find ourselves. So it is not enough to contend with the gates of hell in our locality, we must take the battle everywhere we go, we must take it with us to work. We simply cannot permit the work of the devil wherever we find ourselves. We are the light of the world, wherever we are darkness should flee, and if darkness is not fleeing then there is something wrong with us. As long as we are on earth the devil is in trouble.

"By this shall all men know that ye are my disciples, if ye have love one to another." (John 13:34).
Tertullian (155– 240 AD) was describing the early Church and how the world around them perceived them; "It is mainly the deeds of a love so noble that lead many to put a brand upon us, "Behold how they love one another"". (The Apology, ch. 39).


The believers in the secular world should represent the Ecclesia of God their. Wherever we find fellow believers we are supposed to bond with each other. We are supposed to cultivate love and fellowship with one another wherever we meet. Many of us spend a lot of time at work with fellow believers yet we do not really know them or bond with them. We are meant to uphold this testimony; "Behold how they love one another". Let the world see the level of love we demonstrate to each other even when we are just meeting each other for the first time.

There ought to be some kind of ecclesia that would develop as we bond with fellow believers at work. Yes, as the bond grows this ecclesia begins to emerge, and then they start sharing concerns about issues at work. They share concerns about the unchecked power of darkness growing in their workplace. This leads them to hold prayer meetings, and from there they ascend into spiritual governmental power in that workplace. As a believer who operates in the prophetic, when you develop great concern about something you will start getting prophetic word concerning that thing.

Yes, those believers at their workplace would start getting prophetic word about issues in that workplace. And whatever they get they share with each other and pray over it. Maybe they create a social media group to foster this bonding and sharing of prophetic intelligence. They establish themselves as the ecclesia of God in that workplace, contending with the gate of hell and exercising the government of God in their workplace. Apart from that they learn how to do their work as an act of worship unto God.

Things like prophetic dance, prophetic art or painting, they are part of it, but it goes beyond art. It encompasses everything you are doing, it encompasses the whole of your life, as long as you doing it as an act of worship. Brother Lawrence would have the atmosphere of heaven surround him when he is washing dishes. We haven't been taught to live a life of worship. When these employees learn to do their work as an act of worship there would be a kind of uniqueness expressed in their work. And they will attract the atmosphere of heaven into their workplace.

That atmosphere of rest and peace, that great sense of righteousness and holiness, and that overwhelming feeling of joy. All these are attributes of God's government that would begin to fill the workplace as these believers seek to represent the Ecclesia in their secular work.

Apart from this workplace ecclesia I believe Christians in certain profession ought to strategically organize themselves to install the reign of God in their profession. Yes, all the believers who are lawyers in Nigeria should form some kind of community to contend with the gates of hell in the legal industry. The doctors, the politicians, educationalists, media, etc. the believer there should be intentional, joining hands together as one body and strategically organize themselves to exercise God's government in those areas.

The Ecclesia, the government of God shouldn't be limited to the locality alone, but it should fill the whole nation. Wherever believers are, there should  be God's government in operation.
Posted by David Emechete at 06:38