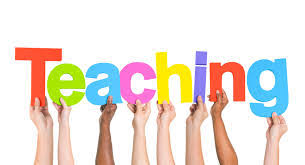 This post belongs to a series and the series flows together from the first to last. So I will advice you start from the first post of the series. In the previous post I established that the teaching ministry is about recognizing patterns, and through the patterns laws and principles in Christ are discovered. Normal Christians will experience Christ throughout their lives and may never recognize significant patterns. They are not gifted with that sight to see the patterns, they will just go through these experiences without recognizing the patterns. But a teacher has a supernatural ability of sighting patterns and discovering laws.

The Teachers would look at the spiritual walk of other people as well as their own spiritual walk and sight patterns of the reality in Christ. I emphasize, PATTERNS OF THE REALITY IN CHRIST. Not just any patterns or any principles that work. It is not about what works, it is about what is Christian. Witchcraft works, the occultic works, diabolic powers works, just because something work doesn't make it Christian. And just because something is in the Bible and it works doesn't make it Christian either. The Bible is largely about a religion called Judaism than the Christian religion. Yes, the larger part of the Bible (the Old Testament) is not about Christianity but a completely different religion called Judaism.

Even the New Testament still consist of people who were largely adherent to Judaism. The twelve disciples didn't saw Christianity as a new religion, they saw it as a government, a kingdom. Judaism was still their religion, while Christianity was their government. So what you will find the most in the Bible are content of Judaism. So following a principle just because it's in the Bible doesn't guarantee that you are practicing Christianity. It has to be Christ, otherwise it is not Christian. Do you know that the way the Ifa priests in the Yoruba culture, do divination by casting cowries, was the same way the priests in the Old Testament consult God by casting lots (as a die, pebble, or ball).

Even in the New Testament this same thing was done among the twelve disciples. It was how they picked the person who would replace Judas Iscariot (Acts 1:23-26). Yes, the apostles did Ifa, and it worked, God spoke to them through it. We don't do it today in Christianity but this practice is all over the Old Testament and even in the New Testament. Our very 12 apostles, our oga on top, the first apostles in Christianity, did it, and yet it is not Christian. So just because something is in the Bible, and just because it works doesn't mean it is Christian. We are not after just anything that works, we are after that which is Christ.

"To me, though I am the very least of all the saints, this grace was given, to preach to the Gentiles the unsearchable riches of Christ," (Eph 3:8).

The riches of Christ are unsearchable. They are so many that when we begin to dive into it we would be so occupied that we will not have time to entertain doctrines of men. Now, because of the riches of Christ is unsearchable, there is need for specialization. This would allow for different people to be assigned to specific riches, so that there will be higher concentration and greater discovery. In the study of the natural world we have numerous specialization, there are the biologist, chemist, geographer, zoologist, etc. And each specialization are further divided into other specialization. Under biology we have marine biology, physiology, ecology, botany, etc. All of these are for a world that is no way in comparison with the unsearchable riches in Christ.

Christ is filled with infinite diversity, and this diversity is one of the reasons the body of Christ is so divided today, it ought not to be so. All this can be likened to the whole of humanity divided over the diversity of the earth. Some people going out to live in the sea and declaring that they are only interested in marine biology and water life, and they don't want to have anything to do with the land. Do you know what such a people would be missing? They will miss farm product, they will miss gold and other natural resources found in the land, they will be deprive from eating meat and fruits, they will miss on a variety of nutrients that are available on earth and needed for good health. These people would eventually suffer from a terrible health. They will not grow healthy being isolated in the sea.

In elementary education we are taught a little of everything. We were taught the basics of zoology, biology, chemistry, physiology, ecology, geography, etc. We were allowed to explore everyone of them so that we can be well grounded in the knowledge of the earth. All these are shadows of the reality we are supposed to be experiencing in Christ. There is no need for the division, we should all be grounded in the basics of everything. Yes, we must be well grounded in Christ, even though he is filled with diversity and unsearchable riches.

"Have the roots [of your being] firmly and deeply planted [in Him, fixed and founded in Him], being continually built up in Him, becoming increasingly more confirmed and established in the faith, just as you were taught, and abounding and overflowing in it with thanksgiving." (Col 2:7).

"Then we will no longer be immature like children. We won’t be tossed and blown about by every wind of new teaching. We will not be influenced when people try to trick us with lies so clever they sound like the truth." (Eph 4:14).

So the teaching ministry is diverse in nature yet they work together to establish God's people in the knowledge of Christ. Every Christian should be established in the elementary of the diversity of riches in Christ. And the advance part should be made available in special schools or books, so that those who feel led to learn the advance of specific areas can easily access this knowledge. I may feel led to study deeply on light, and it would save me a lot of time and energy if there is some teaching ministry out there that have gone very deep in the advanced level of the revelation of Christ as the light. Rather than doing all the research myself, I will just patronize this ministry and grasp what the Lord is trying to teach me concerning light. In that way I will be built in my unique ministry in the body—a ministry that is somehow connected to light.