Doubt Is Not Who You Are 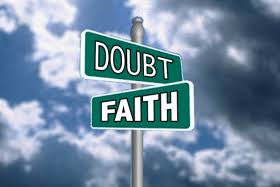 The new man in you have the same measure of faith that God has. The same faith that was in God when he looked at complete darkness and yet believed that if he could say a word, light will come out of that darkness.

Yes, your new man in Christ has the same measure of faith with the Creator. Your new man's faith is unwavering, and he does not have the ability to doubt. There is no doubt in him, he has never known doubt before. So if you feel any measure of doubt in you, that doubt isn't you. Do not accept the doubt as your doubt. It is not your doubt, it is rather the old man — yes, that very man that you died to. Don't give him any attention or recognition, he is dead. He belongs to the grave, he his meant to be gone and lost forever.

Don't waste your time fighting the doubt of the old man. You don't fight someone that is dead. No, you abandon him in the grave and focus on the living. Yes, focus on the new man in Christ — the real you. The real you have the same measure of faith that God has. Rest on this truth and focus on it. As you do, eventually that doubt will disappear. That which is belong to the grave will surely disappear if you do not give it attention or treat it like it is truly alive.

Always focus on who you are in Christ and be awaken to the reality of the salvation that Jesus died to give you. He has paid such an heavy prize for this salvation. Do not fail him by ignoring this salvation. Rather cherish it, pursue it, focus on it, and even become obsessed with it. Show him that you appreciate what he has done for you. Embrace his gesture of love. Love him back by pursuing this salvation and seeking to be consumed by its reality. The Lord himself is your strength.