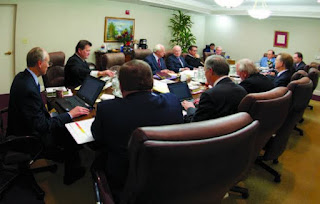 When an ecclesia is formed in a locality their goal is to see righteousness, healing, the supernatural, love, peace, joy and all those reality of the kingdom fill the whole of that locality, reigning over the people. But of course they must start with themselves. For you cannot enforce a reality you have not apprehended. They have to learn to apprehend these reality first, and as they grow in this they start enforcing it in their locality.

They meet regularly not to just sing, dance, hear sermon and go home. Instead, they meet to learn to apprehend this reality in Christ and discuss how to enforce them in their locality. Of course they are not making any decision on their own, they are making decisions from the head (Christ). He is the one that gives them direction on how to enforce the reality of the kingdom into the world around them.

"As they ministered to the Lord and fasted, the Holy Spirit said, “Now separate to Me Barnabas and Saul for the work to which I have called them.”" (Acts 13:2).

The ecclesia in Antioch gathered together, prayed and fasted, and the Lord told them to send forth Barnabas and Paul into the gentile cities so that the Kingdom might spread into all those areas.

So ecclesia gather together so that the Lord can make decisions through them. We do not know how the decision concerning Paul and Barnabas was arrive at, but we know the people in that meeting agreed that it was what the Holy Spirit was saying to the body. So the ecclesia present the cast to the Lord, and then wait to hear him, then they agree upon what he is saying, and they set out to fulfill his instruction.

They do not just gather and pray, "Lord save Nigeria, Lord save Nigeria", and then everybody go home. No, they wait on the Lord to get instructions that they would practically apply for the betterment of the nation (anyway, that is for the national ecclesia i.e all the local ecclesia in a nation). However, the whole ecclesia must agree that this instruction is truly from the Lord.

Not that one man will just come out and say, "this is what I believe God is telling us to do", and everybody would just follow him because he is a very famous man. No, you must tell us how you receive that word and the ecclesia must test it to confirm if it is truly from God.

"And the same with prophecy. Let two or three prophets prophesy and let the other prophets carefully evaluate and discern what is being said." (Acts 14:29).

This is why it is important that there are many prophets in an ecclesia. If there is only one prophet, the guy will just say anything and everybody will follow. And they might end up following a man rather than following God's instructions. If they are following man's instructions then it is the kingdom of man, not the Kingdom of God. It is important that the ecclesia be filled with prophets so that as one prophesy the other will use their prophetic gift to discern. No, you do not discern with logic and reasoning. The faculties of the flesh cannot apprehend God.

When Nebuchadnezzar received a prophetic dream from God, Daniel had to us his prophetic gift to see the dream that another person had and know the interpretation. If you claim you had a vision and God showed you this and this and said that to you. Then you must allow another prophet to go and see if you truly saw and heard what you claimed. Yes, the word must be confirm again and again before the whole ecclesia agree upon it. When they've agreed then they can put it to action.

Now, not all decisions are gotten from prophetic word. They could arrive at a decision by deliberating among themselves and agreeing with the Holy Spirit. Yes, they must ensure that the Holy Spirit agrees with that decision before carrying it out.

"For it seemed good to the Holy Spirit, and to us, to lay upon you no greater burden than these necessary things:" (Acts 15:28).

In Acts chapter 15 the Elders and Apostles in Jerusalem held a meeting in order to make a decision. Although they were very prophetic — these were not baby Christians — yet they didn't receive any prophetic word concerning the situation. We must understand how things work in the Godhead. Sometimes the Father gives the Son instructions. At other times the Father gives the Son a chance to make decisions himself but by the Holy Spirit.

Just as in a democratic system, the majority of the legislator must agree before passing a bill. So also majority of the elders and the ecclesia must agree before they set out to carry out the decision. You can see that what is going on in the ecclesia is strategic decision making. They are not just singing and dancing, and then pray and live everything in God's hands. They understand that they are the hands and feet of God on earth.

They are the body of God — the instrument God will use to do what he wants to do on earth. As such they are not just praying and then go home and hope when they wake up the next morning Nigeria have changed (actually, I mean their locality). It doesn't work that way, they are the government of God's Kingdom on earth.

Their job is to find out how the devil have been reigning and oppressing the people. Then they come under the unction of the throne in heaven and arrive at a decision on how to break the works of the devil and enforce the reality of the Kingdom.

"For this purpose the Son of God was manifested, that He might destroy the works of the devil." (1John 3:8).

Yes we are to destroy the works of the devil everywhere we find ourselves. For this is the manifestation (or reign) of the Son who lives in us.