What Is Christianity (Part 8.2): The Christian Life 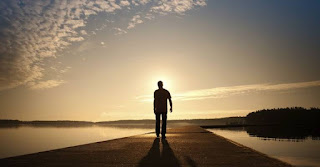 In the previous posts we have seen that Christianity is about the Kingdom — a Kingdom that must conquer the existing power and stand (defend) the territory it has acquired while still expanding, and refusing to take a break as long as the whole earth has not been filled with the Kingdom, continuing in its fight until finally the Lord comes. In this post I want to narrow it down to the individual Christian.

"He has rescued us completely from the tyrannical rule of darkness and has translated us into the kingdom realm of his beloved Son." (Col 1:13 TPT).

The Christian life begins at salvation, and salvation is the deliverance and translation from the kingdom of darkness to the Kingdom realm of God. Yes, you were translated into another realm, and what you are meant to do is to first of all become awaken to that realm. To live in this Kingdom realm you must be awaken to it. If you are not awaken to it then you won't be able to properly carry out your responsibility in this realm. Yes, you have a responsibility in this Kingdom.

Your job is not to go to church every Sunday, singing, dancing and listening to sermon. You are meant to be edified and built up to the point where you are able to mount the throne and do Kingdom business. But if you spend all your Christian life still being spoon fed, and you never ascend the throne or do Kingdom business, then you have not truly lived the Christian life. Sadly many Christians die before truly experiencing the Christian life. Some don't even experience God. While many who experience God never experience life of a mature son. They die before coming to that point.

You will seek to expand the coverage of the reality of righteousness. Let your righteous living influence and inspire others to begin to live righteously. Let your experience of providence begin to cause others to enjoy providence. Let people around you experience the power of God through you, and also learn to wield the power of God like you. When I say the power of God, I am also referring to all the gifts of the spirit and every area of the supernatural. And when I say "ascend/mount the throne", I mean you should grow into these realities in Christ until you come to a point where you are able to disperse it and cause others to experience it.

So this is what the Christian life is — pressing to be awaken to the Kingdom realm and its reality, ascending to the throne, enforcing this reality, expanding its domain, and defending the ground covered. Jesus commanded us to, "seek first the kingdom of God and His righteousness, and all these things shall be added to you." (Matt 6:33). Righteousness is one of the reality of the Kingdom, and along with righteousness are other realities too. You must focus on this and don't worry about other things because God will surely take care of them.

To be awakened to this reality you must first understand that you are in it and it is in you. Right from when you got born again you were translated into this reality, and this reality is now living in you. But you have been so distracted with life that your senses remain dull to this reality. It would take a lot of focus in order for you to grow aware and awaken to this reality. There are contemplative and meditative exercises that you can do. These exercises will recalibrate your mind to maintain an intensely sharp focus that would lead to awakening.

Soon you will begin to sense these realities. They will feel more tangible to you. It's almost like you could touch them. As you continue to press, over time your grip on these realities will grow. You could not only touch them but you could wield them. Yes, you must come to that point because you cannot be effective in enforcing the Kingdom reality until you know how to wield them. So your job right now is to press and keep pressing hard. Be disciplined, be strong and be persistent.

This post is taken from a series. Below are links to the rest of the series:

What Is Christianity (Part 1): From The First

What Is Christianity (Part 2): Kingdom, City and a Bride

What Is Christianity (Part 3): Man's Perception Of Religion

What Is Christianity (Part 4): The People Of Israel

What Is Christianity (Part 5): The Origin Of Our Worship Service

What Is Christianity (Part 6): Towards A New Structure

What Is Christianity (Part 7): Ecclesia In Each Locality

What Is Christianity (Part 8): The Christian Life